"Filthy genius movie"
Sexual tensions heat up between two army recruits, torn between their duties to their hearts and to the South African regime - on Curzon Home Cinema on Friday, April 24th

Nicholas Van der Swart (Kai Luke Brummer) is a white boy in South Africa during the 1980s. He is required to serve the military service for two years, upholding the racist regime. He is also a closet homosexual.

The shy and worried-looking teenager is presented with a lewd magazine, its women presented in various forms of undress. It’s a parting gift, the boy now taking a train journey to adulthood. His carriageway is a claustrophobic decoration of snaffled booze, bravado punches and projectile vomit. He watches one of the men he shares the train with taunt an innocent black bystander for fun. When they arrive at their base, the boys are subject to the gruelling workouts that echo Stanley Kubrick’s Full Metal Jacket (1987).

It’s a testosterone-fuelled, tough, male-led film, with splashes of gentle and delicate camera work thrown in. The viewer is led on a balletic swoop over the naked bodies as they communally shower. It’s done with elegant flair, silhouetting over the soldiers before landing on the pensive, apprehensive Nicholas. “Moffie” is vulgar slang for a homosexual. 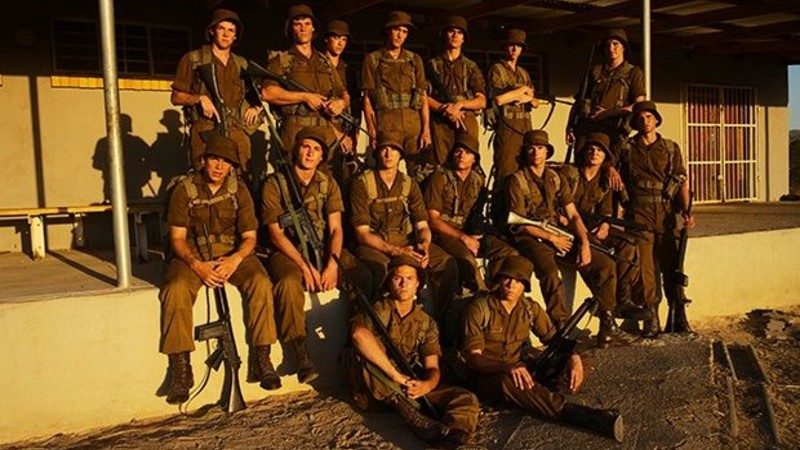 Sachs (Matthew Vey), who holds Nicholas as a close friend, speaks out of turn during an instructional video: he’s subjected to physical and verbal humiliation in front of his classmates. A tiring exercise ends with further disillusionment for the adolescents as they watch their leader throw away the soup he’d long promised them. Digging in torrent rain, Nicholas’s wavering eye is drawn to the smouldering Stassen (Ryan de Villiers). They share their trench and beds together, their eyes meeting with electrical froth. When they return to their dorms, Stassen and Nicholas are prompted to engage in playful fisticuffs and told to “fuck” each other up. In a flashback, the young Nicholas remembers why he shouldn’t look at others in the shower. The verbal punishment he gets would stick in anyone’s memory.

The sexual tension is air-tight, but the director Oliver Hermanus never loses sight of the tense political backdrop from which the film hangs. In a country where identity is everything, to be unsure of yours is devastating. In his way, Nicholas is as beautiful, but as rocky, as the mountains he trains on. Essential viewing.

Daniel Radcliffe and Daniel Webber star in this real-life drama about two white political prisoners who hatch an ambitious plot to escape from prison - on all major VoD platforms on Monday, March 7th [Read More...]