"Greasy movie"
The suburbs have never been this terrifying before, in this Irish sci-fi thriller starring indie double act Jesse Eisenberg and Imogen Poots - on VoD on Friday, March 27th

Lorcan Finnegan’s first widely distributed movie (he had made one previously that had a festival run), was one of the first films in the UK to have its theatrical release cancelled over the coronavirus cinema closures. It stars Jesse Eisenberg and Imogen Poots as Tom and Gemma, a young couple who decide to look into buying their first house. They meet a very odd realtor, and drive out to see a house that he’s showing. Very quickly they notice that all the houses in the labyrinthian suburb have the same design. Halfway through the viewing, the realtor disappears, and they decide to leave – but as they try to drive away, no matter where they go, they keep ending up at the same house. They wait for the realtor but he never returns – and suddenly a baby is delivered that they have to take care of. From there, things just get stranger and stranger as it goes along.

The film reminded me a lot of Seconds (John Frankenheimer, 1966). Both movies have a similarly dirty and unsettling twist. It’s definitely pulling on very solid influences, from films about the suburbs like Parents (Bob Balaban, 1989) to The Truman Show (Peter Weir, 1998), to plenty of Twilight Zone episodes with similar concepts. 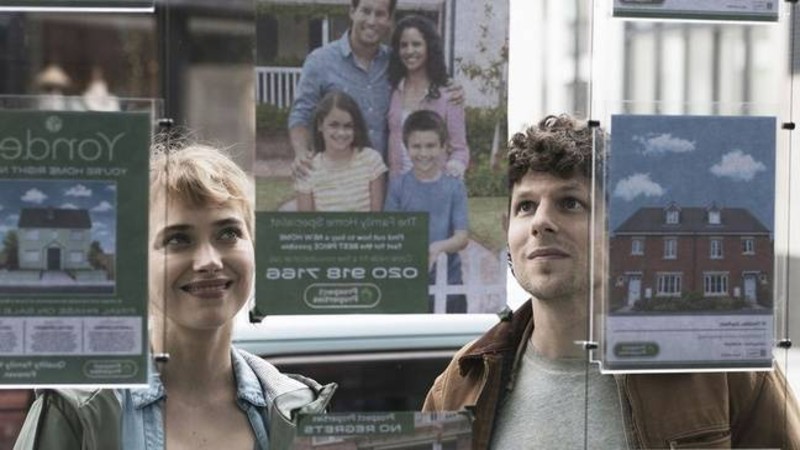 Although it was made without loads of money, it’s very well crafted, with some impressive world-building involved. There is a a real sense of the scale. All the houses are painted in this distinct shade of blue-green, and they reminded me most of the houses in Edward Scissorhands (but in this case, identical). It was shot in Belgium and Ireland, and has a very strange location feel – you can’t quite put your finger on where it is, which is deliberate and adds to the atmosphere.

It’s centred on two of the best young actors around. Eisenberg and Poots starred in The Art of Self-Defense (Riley Stearns) last year: they are a good, quirky, indie double act with some real chemistry.

Vivarium has some funny moments, although it’s not a laugh-out-loud film by any stretch. It definitely has its quirks, and goes in some very interesting directions, with a very strong ending. You see it coming to some extent, but you’ll still be impacted. It adds to the long lineage of films for those who, like me, have always found the suburbs terrifying. It gives a whole new meaning to the line from the Talking Heads’ Once in a Lifetime: “How did I get here? This is not my beautiful house.”

Vivarium is streaming from Friday, Match 27th on all major platforms.

Sinister suburban comedy from Italy is a hybrid amalgam of hapless children and maladroit parents - from the BFI London Film Festival [Read More...]

Absurdist comedy mocks suburban life in the US, and the outcome is mostly cringeworthy - in cinemas Friday, November 22nd [Read More...]