DMovies sat down with the Ukranian director Oleg Sentsov, recently out of Russian jail, about his latest film, an allegory about the abuse of power.

Ten people stand on a stage. They are all assigned a different number. Ruled by a mysterious man called Zero, they follow strange and mysterious rules in an intentionally artificial, play-like arena. An allegorical tale that could be applied to both modern Ukraine and Russia, it sees Oleg Sentsov exploring the nature of power in relation to belief.

He knows a thing or two about the way power can be distorted to hurt vulnerable people. The Crimean activist was placed under arrest in 2014 following Russia’s invasion of Ukraine and sentenced to 20 years in prison under false charges of plotting acts of terrorism. After five years, he was released from jail in a prisoner swap.

Based on his own play, Numbers (Nomera) was co-directed by Akhtem Seitablaev under Sentsov’s precise jail-bound instructions. The film debuted at the Gorki Theatre in Berlin before playing at the Berlin Film Festival in the Berlinale Special section. We sat down with Oleg Sentsov to discuss the unique way the film was made, the therapeutic power of writing, and the ability of art to effect political change.

Redmond Bacon – You are still working as an activist. Could you tell us about this part of your life?

Oleg Sentsov – It’s a very important part of my life. I saw the necessity to become a human rights activist as soon as we started fighting Viktor Yanukovych. Afterwards Maidan happened, then the war started, and now many of our people are in prison. This is still going on. This war is still going on. The rest of Europe doesn’t notice it, especially now. We have over 300 of our people still in the Donbass region, sitting in Russian prisons. Until they are free, until the occupied territories are liberated, I won’t stop this civil rights activity.

RB – Are you more of an activist than filmmaker?

OS – Cinema is more important for me, at least for my inner spirit. I also know one day, when we have won victory over Putin, I can return to cinema. But as long as this war is going on, I’m going to carry on doing what I’m doing now.

RB – Your film is a blend between theatrical and film styles. How would you classify it?

OS – There are different things I work on as a writer. I write scripts. I also write novels and short stories. As far as Numbers is concerned it was written as a theatre play in 2011. I said, very consciously and very deliberately, that if it was going to be turned into a movie, it must be done in a theatrical style, otherwise this material, this subject wouldn’t work.

RB – Could you tell us a little bit about the process? About how it was made when you were still in jail?

OS – I only had two instruments at my disposal. I could receive and write letters and I could see photographs. Most of them were brought to me through my lawyer, who had access to me. When he was there he would show me letters or photographs through the glass pane that separated us and I would answer. The preparation for such a project takes a long time. I was not allowed to see video samples or anything, but I had talented guys who were able to visualise what I wanted to see and wrote to me what I needed to know so I could confirm.

RB – Did you feel hopeless in jail? Like you would never do another film?

RB – Did the process of making the film help to improve your mental health, and to keep you motivated?

OS – It helped me a lot. Because you can turn into someone completely different when you’re in jail in terms of your physical, mental, spiritual and intellectual state. You always have to take care of yourself. It is very easy to lose a sense of human value. What helped me not to turn into somebody who is completely lost was by reading and working a lot. This film is only one part of the work I did when I was in jail. I found many other ways to express myself. I brought lots of sheets of paper. 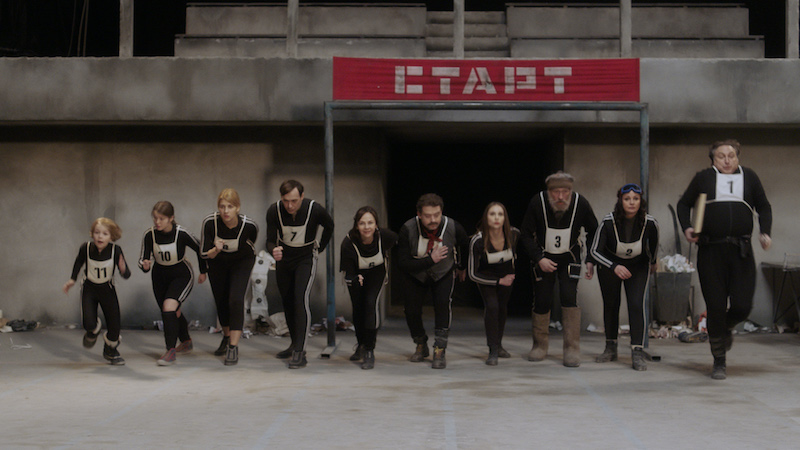 TB – Was the play itself inspired by any particular government? After all, it is quite a universal allegory?

OS – It’s a universal theme. But on the other hand it was motivated by the memories we had of the former Soviet Union. The slogans of the film are written in Russian, and in a Soviet Style.

It’s also a play that reminds you that any fight against the regime can end up in a situation that’s even worse than the one you were in before. We have very vivid examples of that. The Russian revolution brought about a worse regime. Likewise the French revolution ended up in terror.

RB – And what is your view on the future of Ukraine? Pessimistic, optimistic?

OS – Well, I’m neither optimistic or pessimistic. I’m a realist. But I believe in our victory. After all, Ukraine is a country that wants its independence. It is a democratic country with a Western orientation. We do not want to come under the same supremacy under Putin like in the Soviet days.

OS – You have to realise that he doesn’t want to have a light influence. Putin wants to completely control and subject us. He is going to do it via different ways and means. Be it an open war, a secret FSB-style war, or a hybrid war. This is what he’s doing not only in our country but all over the world. Take the example of Africa, Syria, United States, where he tries to influence. He also tries to influence Europe by supporting any radical group he gets access to. 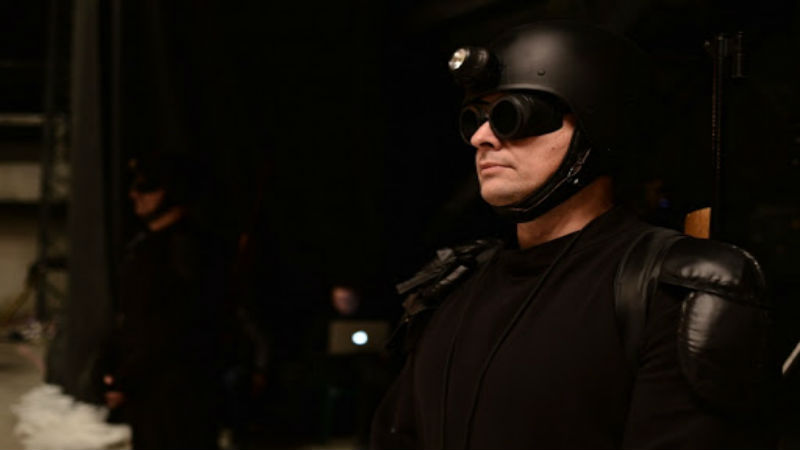 RB – So Trump is an entertainment figure. And Zalensky, the President of Ukraine, was in a TV show, Servant of the People, about an average man running for President before actually becoming President himself. Do you think that art and cinema has the opportunity to change political structures?

OS – I always believe that art does and should have an influence. This is how people grow up. As children they start by listening to music, reading books, watching movies or going to the theatre. It is the task of art and culture in general to make people better. To bring them up and educate them culturally. This is a very slow process. It develops step by step.

There’s certain moments when somebody from the world of arts turns into a politician. Our current president is not the only example. I could mention Reagan, who was quite a good president, although his films were rather bad. He was better off as a politician.

The image at the top of this interview is from Oleg Sentsov, the other two below are from his film ‘Numbers’