Photographed like a fairy tale and penned like a freak show, this droll movie set in the upper middle-class outskirts of Rome is teeming with peculiar families, and it’s also a real lesson on bad parenting. It’s not intended to make you laugh. Its misanthropic teachings instead will leave a bitter taste in your mouth, in a way not dissimilar to absurdist American suburbia comedies/dramas such as Parents (Bob Baladan, 1989) and Happiness (Todd Solondz, 1998), or the more recent Suburbicon (George Clooney, 2017) and Greener Grass (Jocelyn DeBoer and Dawn Luebbe, 2019).

Life in the burbs isn’t all green lawns and jolly neighbours. Bad Tales, as the title suggests, is a grim movie about the tragedies and the obsessions of those who live a seemingly comfortable life in a rich and colourful world. The houses are big, the haircuts are perfect, the meals are abundant. The cinematography is vivid and expressive. The characters, on the other hand, offer a strange counterpart to exuberant imagery.

These people do not exude happiness. Elio Germano (who received the Silver Bear for Best Actor for his role in Giorgio Diritti’s Hidden Away, a film that premiered in Competition at the Berlinale alongside with this very one) plays the formidable and unpleasant Bruno, the father of two straight-A prepubescent adolescents. He is married to Dalila (Barbara Chchiarelli), but their parental skills are beyond questionable. They impose strict rules and treat their children with little affection and a lot of anger, in a reflection of their very own relationship. 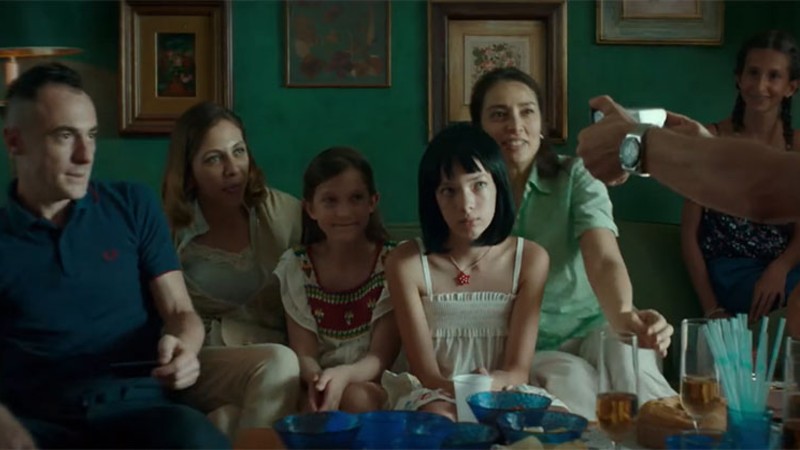 Amelio (Gabriel Montesi) is the very opposite. He’s a single father devoted to his hapless son, who catches measles. And there are other families. A very strange mother wants her daughter to develop the highly infectious illness. The two parents arrange a play-date, in the hope that the boy will share the rubeola virus with the girl. The animosity between the families explodes when a plastic pool garden is destroyed by the blade of an envious neighbour, inundating the garden and the street with chlorinated water.

The film is split between the parents’ and the children’s perspective. Awkwardness prevails in both cases. It isn’t just the adults who are socially maladroit and with very questionable motives. In the film’s most hilarious sequence, two children attempt to have sex, only for the boy to run away as the girl lies waiting for the interaction. The children don’t seem to understand sex, but instead they wish to emulate their dysfunctional parents. They are therefore perpetuating the generational failures. A morbid gift.

While effective at parts, Bad Tales is just too disjointed and does not work as a whole. It overdoes the wackiness, and the outcome is soulless and trite. Bleakness can be a valuable filmic device, but here it just feels gratuitous. The Italian identical twins are trying too hard to be Todd Solondz. The narrative relies too heavily on topical conversations that are never woven together. As a result, the movie becomes a little tedious.

Bad Tales showed in Competition at the 70th Berlin International Film Festival, when this piece was originally written. To my surprise, it won the Silver Bear for Best Screenplay. It premieres in the UK in October, at the BFI London Film Festival.