"Dirty gem"
Try walking in the shoes of this 17-year-old pregnant female from rural Pennsylvania who cannot rely on her family - Eliza Hittman's third feature film is on VoD on Wednesday, May 13th

Autumn (Sidney Flanigan) leads an ordinary and uneventful life in Northumberland, Pennsylvania. She plays the guitar and sings, but her artistic skills are challenged when she’s insulted on stage. She has a family and a boyfriend, but neither one is either kind or supportive. One day, Autumn is faced with a very unexpected and unwanted pregnancy. She challenges the doctor: “is there any chance that the positive result is wrong?”, only to be told, “no; a positive is always a positive”.

She works in a supermarket with her cousin Skylar (Talia Ryder), the only person on which she can count. At first, she attempts a self-induced abortion by drinking toxic substances and punching her own abdomen (to the point of covering herself with shocking bruises). She then decides to travel to New York, since Pennsylvania law requires her parents’ consent for a termination, and she wishes to keep her pregnancy secret. Skylar steals some money from the tills, and the two girls embark on a short journey to the City that Never Sleeps, in the hope to return home without the unwanted child inside Autumn’s womb, thereby resuming their lives as normal.

Autumn is quiet, almost laconic. She is unable to convey her emotions in detail, and instead just internalises her pain. The film’s most crucial moment is when a New York doctor confronts her about her health, sex life and relationship to her boyfriend and family. She has to choose between “never”, “rarely”, “sometimes” or “always” when asked questions about psychological and physical violence. She isn’t always able to verbalise the answer, but the responses are written on her face. Autumn has experienced abuse. 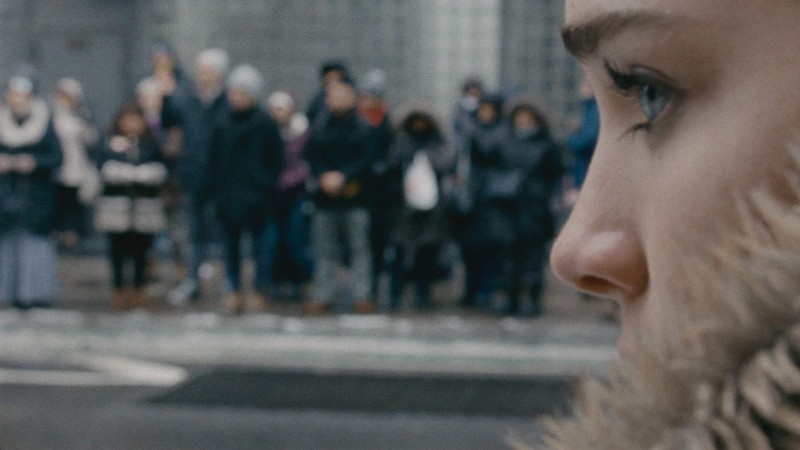 Never Rarely Sometimes Always is as close as it gets to an American version of Christian Mungiu’s 4 Months 3 Weeks 2 Days, which won the Palme d’Or in Cannes in 2007. Both protagonists are young and naive, confronted with a bureaucratic establishment unwilling to support them. In this sense, Ceaușescu’s Romania isn’t too different from present day US. Despite certain types of abortion being legal in the US, young and vulnerable women and teens have to grapple with an onerous and expensive insurance system, Both films are also rather graphic, with details of the procedure made very clear. Neither movie, however, is exploitative.

Hittman has created yet another auspicious drama – alongside with 2018’s Beach Rats – about a despondent young person dealing with the consequences of sex. The 41-year-old New York director has smoothly sailed from firmly male into resolutely female waters. She’s successful at both attempts. She keeps a respectable distance from her characters, allowing the action to unfold in a realistic pace. The outcome is neither fetishised nor sanitised. They are just young people full of doubts and dilemmas, and prepared to resort to extreme measures in order to rectify their lives.

Never Rarely Sometimes Always showed in Competition at the 70th Berlinale, when this piece was originally written. It won the Silver Bear. It’s out on VoD On Wednesday, May 13th.