"Mostly clean movie"
To keep their minds otherwise occupied while their soldier husbands are away fighting in Afghanistan, a group of military wives on an army base form a choir - on STARZPLAY on Tuesday, May 4th

Twenty and a bit years after the hilarious British comedy The Full Monty (Peter Cattaneo, 1997) in which a group of unemployed male steelworkers reinvent themselves as a striptease act, director Cattaneo tries something similar with a group of soldiers’ wives on a British army base at the time of the Afghanistan War who, in order to deal with their isolation from their active service husbands, reinvent themselves as a ladies choir. Where the men in the earlier film underwent a crisis of identity when they lost their jobs, the women here are by default defined by their absent husbands, waiting for the text messages that inform them their men are out of satellite contact until further notice or, worse, the knock on the door bringing news of their loved one’s death.

Insofar as the film is interested in the effects of war, its concern lies with how the wives left back on the base cope with their situation. The army’s idea is, let the wives find some group community project to keep their minds otherwise occupied. Left to their own devices, consumption of alcohol is a popular option. When pushed towards something more constructive which they can do as a group, these particular wives alight on the idea of a choir. 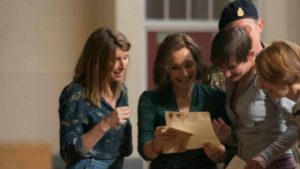 You might think that Cattaneo, who so brilliantly deployed a bleak Yorkshire view of life to great comic effect in The Full Monty to show the terrible effects of unemployment on people, might try to plumb the darkness of these women defined by their absent husbands’ employment to similarly poignant comic effect. For much of the narrative, however, the overall feel is much more twee, falling back on the pairing of chalk and cheese leads Kristin Scott Thomas and Sharon Horgan while failing to give the other, promising female cast members more than one showstopping, character-defining scene each.

Colonel’s wife Kate (Scott Thomas) is both aloof and complex, a woman who perhaps understandably looks down on the lower ranking wives. She also has personal demons in the form of never having got over the death of her soldier son who was killed on active duty and in private spends her days binge buying household items she doesn’t need from the shopping channel. The lower ranking Lisa (Horgan) is a life and soul of the party type, very much one of the girls, and used to play keyboards in a band back in the day. As Kate tries at once to take charge and not to interfere with Lisa’s running the choir, conflict between the two is inevitable. 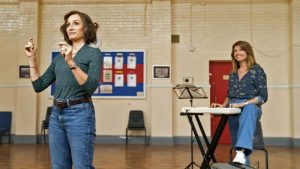 While the pairing of these two is a definite asset, with the two actresses clearly able to contribute far more than lesser actresses might, the script at least as filmed fails to fully develop the characters of the other women in the choir. One wife can’t sing in tune but thinks she’s God’s gift to music. One discovers she can sing while the group pause in a tunnel to rest during a cross country walk. One has a husband who repeatedly leaves two teddies in explicit sexual positions on the bedroom shelving. And one, inevitably, is going to get that terrible knock on the door at some point in the film.

There are occasional moments of astute observation, for instance the opening when Kate’s car, entering the base, is held up at the entrance checkpoint by a soldier who, through a mixture of following orders and being new to the base and therefore not knowing who she is, keeps her waiting. And there’s a very nice plot thread in which Kate has to use her late son’s run down car, known affectionately as Shite Rider, to get to a concert venue. I would be lying if a said there were no laughs. What’s more, occasional scenes are extremely moving.

However, much of the film comes over as twee in a way that The Full Monty never did. I couldn’t help but feel that the film could have been a lot more abrasive and darker and funnier, perhaps in the process doing greater justice to the real life military wives on whom the story is based. In the end, this is a largely lightweight audience pleaser when, as its occasional heavier and darker scenes suggest, it could have been so much more. The Full Monty it isn’t.

Blinded by the Light

British Pakistani teen finds a venting outlet in Bruce Springsteen's music, as he grapples with a conservative father and a profoundly racist Britain in the late 1980s - now available on VoD [Read More...]

Tragedy turns into amusement, in this elaborate trinket of British filmmaking dealing with scrabble and starring a magnificent Bill Nighy - now available on VoD [Read More...]

The general manager of the Double Whammies sports bar must contend with all human life in the course of a particularly trying day - American comedy is now also available on BFI Player [Read More...]