There is no storyline, no contextualisation and no chronology. This Italian/German/Mexican co-production follows the footsteps and the imagination of a man (Ferrara’s regular collaborator Willem Dafoe, often described as the director’s “acting ego”) who meanders through various continents and episodes of his life, reconnecting with his late parents, past lovers and all types of strangers. And even with his own reflection in the water. There’s a pregnant Russian woman, and a blonde one that morphs into an oriental female. People often speak languages (Russian, Japanese) that our protagonist doesn’t understand, and there are no subtitles. Don’t try to make much sense of it. The distancing is intentional. These fragments are random and diverse, and they are not intended to fit in together neatly. This is a metaphysical and sensory experience, not a prosaic one.

The film, which was penned by Ferrara and Christ Zois, begins in a cold and barren land, presumably the titular part of Russia. It then travels to deserts, woods and dense forests. The cinematography is quiet and meditative. The images of the snowy mountains are particularly impressive. DOP Stefano Falivene films non-conventional bodies from non-conventional angles. This includes Dafoe’s scrawny and bony figure, captured in good Ergon Schiele style. The Wisconsin actor is very effective at conveying a sense of reflection and introspection. I imagine that the New York director, more used to gritty urban environments, found inspiration in Tarkovsky’s photography for his latest movie. Naturally, his cinematographic skills are far inferior to the late Russian filmmaker. 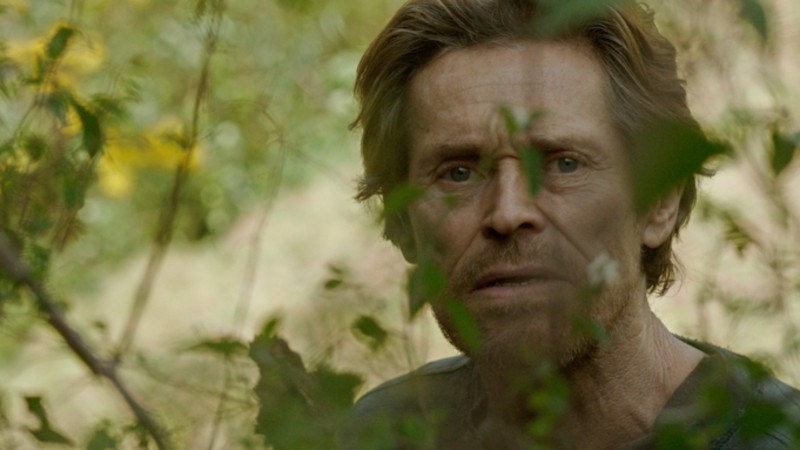 The problem with Siberia is that it focuses on one individual character without allowing for character development. As a results, the images seem gratuitous. Ferrara fails in his lyricism, This is not Tarkovsky’s Mirror (1975), a film devoid of storyline and chronology, yet bursting with exuberant and fathomable symbols. Ferrara’s latest feature film has a lot of blood, of dogs, of disabled people, and even a talking fish. But these signifiers never gel together. I have no idea why the film is called Siberia and quite frankly very little desire to find out. It’s a movie intoxicated with idiosyncrasy, to the point of alienation.

Siberia received a frosty reception at the Berlinale, when this piece was originally written. Many people laughed out loud throughout the film, which is intended to be a meditative experience, not a comedy. Plus people walked out of the cinema in droves. It premieres in the UK in October as part of the BFI London Film Festival.