"Greasy movie"
The real-life beauty and the bitch! Graduate student has to contend with the ultra sadistic horror writer Shirley Jackson, as she moves in with the her husband into the author's mansion - American drama starring Elizabeth Moss is in cinemas Friday, October 30th

In the year of 1964, the highly reclusive horror writer Shirley Jackson (Moss) and her husband Stanley (Michael Stuhlbarg) “welcome” two graduate students into their Vermont mansion, Rose (Odessa Young) and her spouse Fred (Logan Lerman). Rose and Fred are vibrant, optimistic and full of life. Shirley are cruel and offensive misanthropes. Shirley will attempt to hurt and humiliate the naive couple at every opportunity. Her equally unpleasant husband will support her in the very questionable endeavour.

Shirley wasn’t just a reclusive, who rarely ever left her large estate. She was also a sociopath. In the few occasions when she ventured out of her property, she helped to ensure that everyone in her surroundings felt threatened and mortified. Her actions included the the sharpest and meanest remarks, pulling scary faces and spilling wine on the sofa. Her gaze overflowing with hate and envy. She has Bette Davies eyes, complete with the bitchiness of Margo Channing in All About Eve (Joseph L. Mankiewicz, 1950). The difference between between Davis’s character and Shirley is that the latter is genuinely cold-blooded and brutal.

The heavy drinking and smoking author (who died just a year later, a the age of just 48), Shirley was attempting to find inspiration for her writing. No one could enter the room where she worked. She literally attacked Rose when she quickly looked at her latest words still attached to the typewriter. And this isn’t the only time that Shirley resorted to physical violence. Other ruses included feigning her death and forcing Rose to eat a “poisonous” mushroom. Plus she was hellbent on destroying Rose’s relationship with Fred, particularly upon finding out the young woman was pregnant. Rose and Fred put up with the abuse because they are strangely fascinated by Shirley and Jason’s repulsive yet magnetic demeanour. 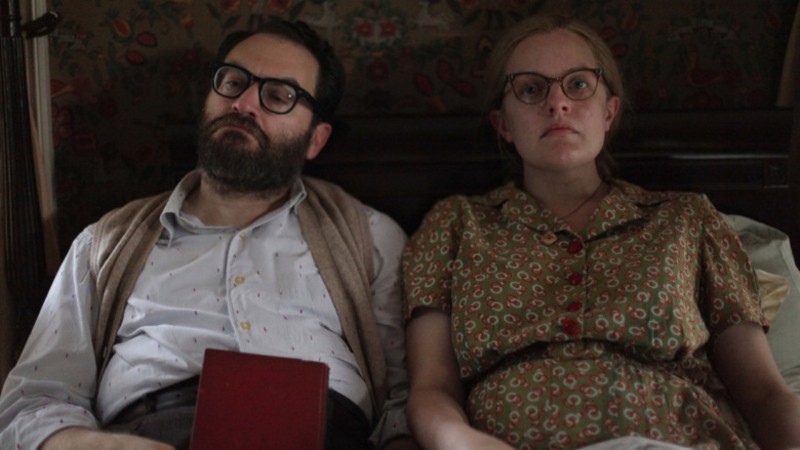 Josephine Decker’s fourth feature fiction is crafted like a horror movie, with dark imagery, unusual angles and action confined mostly to one creepy Gothic mansion. It’s mostly effective, yet rather conventional for a director more used to formally complex and multilayered movies (such as last year’s Madeline’s Madeline). What the two films have in common is that they both examine a female character experiencing a mental breakdown.

The film presumably blends real with fictional elements, as Shirley never wrote an autobiography, and the screenplay was signed by Chicago playwright Sarah Gubbins. The ending is the most powerful and ambiguous part of the movie, when Shirley and Rose confront each other under very dramatic circumstances. Have the tables turned? Is there perhaps a scintilla of humanity in this profoundly bitter human being?

Shirley showed in the 70th Berlin International Film Festival, when this piece was originally written. It was part of the Encounters section. It was a hit in Sundance a month earlier. The film, which was exec produced by Martin Scorsese, premiered in the UK in October, as part of the BFI London Film Festival. It’s out in cinemas on Friday, October 30th.

Mother and daughter navigate life residing on a Nicaraguan landfill, in this at once captivating and chilling piece of cinema - from the San Sebastian Film Festival [Read More...]