"Dirty gem"
The personal life of a museum guide in Berlin has as many twists and turns as the history of the German capital - on Curzon Home Cinema on Friday, April 2nd.

Undine (Paula Beer) is an eloquent historian. She teaches tourists about the architectural history of Berlin in a local museum. She shows them a giant model of the city as it currently is and another one of what it would look like now had the GDR not unexpectedly collapsed 30 years earlier. Her life is also seeing a very abrupt change: her lover Johannes (Jacob Matschenz) is about to dump her. The nonchalant yet assertive female has threatened to kill him in case he proceeds with his plans. She does not wish to see their romance confined to the past, just like urbanistic plans for the defunct communist state.

She then meets the handsome Christoph (Franz Rogowski), a diver familiar with the underwater secrets of the German capital. The grounded lady and submarine gentleman complement each other. They meet entirely by accident (literally), in one of these rare occasions when the underwater world comes crashing into the surface. Undine was unwittingly waiting to submerge into Christoph’s world for some time. Her name is a reference to a 200-year-old German novella about a water spirit.

Undine’s romantic life keeps going underwater and resurfacing for air, much like the city where the entire film takes place. We are told that the etymology of the word comes from “dry land about the marsh”, indicating that Berlin has a profound relation water. In reality such etymology is disputed, with many historians arguing that it comes from the word “bear” instead. One way or another, water pervades the city, and it’s on one of the many footbridges on top of the Spree River that a very fast and unfortunate encounter takes place. 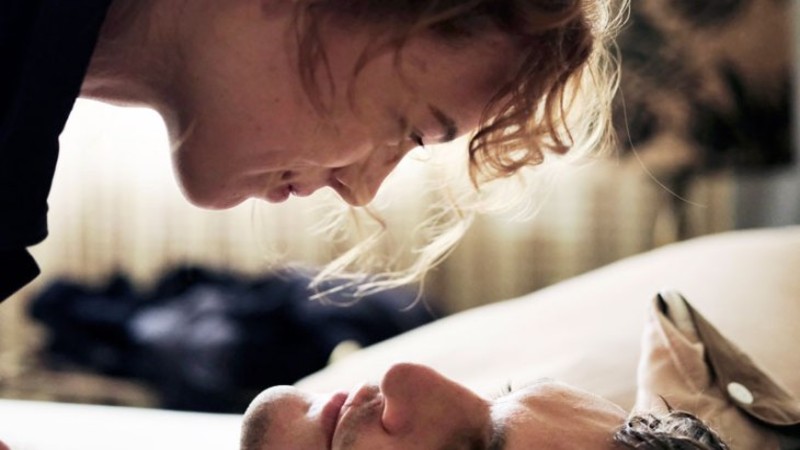 The camera is almost entirely static throughout the movie, giving it a distant, almost Brechtian feel to it. It’s as if the characters were imprisoned within the frame. Yet they continuously attempt to break the mould, and to change their personal history. The ending is particularly powerful, when life and death acquire an entirely new dimension for Undine, Christoph and Johannes. Misfortune and zemblanity prevents our protagonists from achieving their full romantic potential. Yet they stay afloat and reinvent themselves, just like the German capital in the course of the past eight centuries,

Dotted with awkward surprises and very strange symbolisms, Undine firmly establishes the Christian Petzold’s reputation as one of Germany’s most innovative auteurs. He’s stepping on familiar ground, having worked with both Beer and Rogowski in his previous movie: the equally unusual Transit (2018). And it isn’t just the actors that the movies share. Both blend past and present in a very unusual way. Petzold has a crafted an instantly recognisable and vaguely absurdist language, some sort of gentle German Lanthimos.

Undine premiered in Competition at the 70th Berlin International Film Festival, when this piece was originally written. It is part of the BFI London Film Festival in October. On Curzon Home Cinema on Friday, April 2nd.