"Greasy movie"
Witness two different versions of Romania: the alienating secret state and the dynamic communist ideal - watch it online for free in December only with ArteKino

Two films in one. In the former, we learn of Romanian Mugur Călinescu, who, upon listening to messages from Radio Free Europe in 1981, writes pro-democracy messages on walls in chalk. In the second, Radu Jude presents archival footage from the time. The propaganda scenes, however staged, are exciting and filled with life; the reality, however true, is artificially staged and alienating. They form a curious dialectic: Romania as it really was, and Romania as it presented itself on television.

It starts with a quote by Michel Foucault: “the resonance I feel when I happen to encounter these small lives, reduced to ashes in the few sentences that struck them down.” Starting mid-sentence, it is typical for the Romanian director, who likes to present things to you piecemeal, expecting the viewer to fill in their own details.

This quote is more apposite considering the way the stages are set up. Arranged in a circle, they resemble his famous panopticon, and stress the all-powerful surveillance scheme of the Securitate, the secret police force of dictator Nicolae Ceaușescu.

An adaptation by the documentary play by Gianina Cărbunariu — which was assembled through police transcripts and secret recordings — these scenes are deliberately alienating. Characters recite their lines with little passion, meticulously explaining the events around Călinescu’s illegal pro-democratic writings and how the Securitate came into contact with them. They are framed against bright pink and purple lights, with giant tape recorders and televisions in the background, deliberately making everything feel artificial. 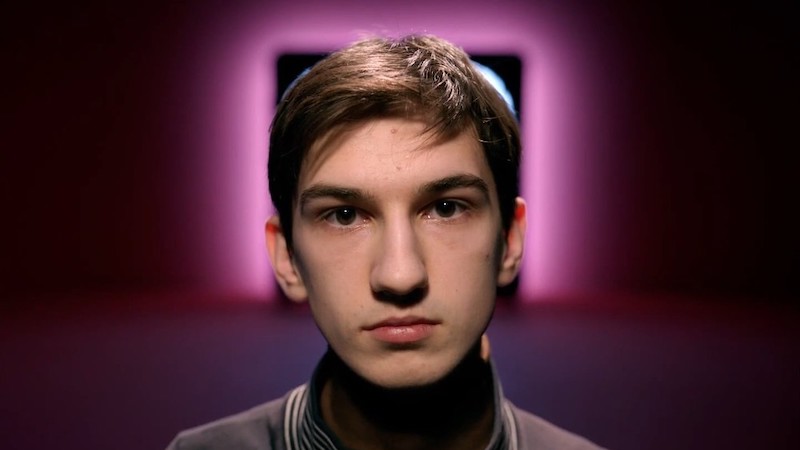 If these scenes are carefully calibrated, the propaganda is far more chaotic. Ranging from the obvious pageantry found in a dictatorship to songs about children being the future to people being fined for honking their car horns illegally, these scenes form a strange and bewildering counter-narrative. What makes it a disorientating experience is that the links between the two clips are not obvious, forcing the viewer to work through their own connections.

Radu Jude makes active films as opposed to passive ones. You can’t simply sit back and enjoy a film like Uppercase Print; you have to bring your own intellect to bear upon Jude’s, making them challenging cine-texts. Nonetheless, for those patient enough to tackle them on their own terms, they can be immensely rewarding.

If there’s a through-line between this and Radu Jude’s previous film, the more stylistically diverse I Do Not Care If We Go Down in History as Barbarians — which tackled Romania’s shameful role during WW2 — it is the sad fact that people don’t know or reflect upon the mistakes of history.

The entire film comes together in its final moments — which jolt us back into the present day, showing that little has truly changed. One of the men justifies his surveillance tactics by invoking Cambridge Analytica; reminding us that constant surveillance is hardly a concept novel to communism. By analysing Romania in such forensic detail, the film opens up to the world, reminding us that these issues can happen anywhere.

A truly difficult work, its not one I can say I enjoyed as much as I found intellectually stimulating, like listening to a fascinating yet over-long lecturer from an intermittently charismatic professor. Nonetheless, it remains a convincing reminder that Jude is one of the most unique directors working out of Eastern Europe today. I want to see everything he’s made.

Uppercase Print played in the Forum section of the Berlinale, when this piece was originally written. Watch it online for free in December only with ArteKino

Deep dive into the claustrophobic refugee experience in Germany, as a Syrian couple struggles to integrate - watch it online and for free during the entire month of December only with ArteKino [Read More...]

A mother searches for her absent son in the shadow of the Hong Kong protests, inviting the audience to enter a hypnotic space - watch it for free during the entire month of December only with ArteKino [Read More...]

Set in an institute for people with disabilities, an unlikely love triangle emerges - watch Serbian movie online and for free during the entire month of December only with ArteKino [Read More...]