"Greasy movie"
Bloody tale of parental bonding is a nasty piece of filmmaking with vast amounts of gallows humour, starring Elijah Wood - out on VoD on Friday, Febryary 21dt

Longtime producer Ant Timpson’s directorial debut is an energetic comedy-horror, which borroes freely from different genre staples in order to create a potent and fresh hybrid. Thirty-something millennial Norval (Elijah Wood) travels to a cabin (in the woods, of course) to see his estranged father, who sent out a letter reaching out to him. Once he arrives there, a selfie gone wrong puts his phone out of action. With each confrontation, the man with whom he’s trying to reconnect grows meaner and weirder. Without communication and surrounded by miles of wilderness, he realises soon enough that he’s trapped. Eventually, the atmosphere in the house – which was never very familial – descends into brutality.

The film constantly shape-shifts, with every detail pulling the audience into a rabbit hole. The first act plays out like a slow-burning family dramedy, but when a shocker sets a speedy chain of events in motion, it morphs into a home invasion thriller, and it all ends up in horror. It never really goes where it’s expected to and never stays anywhere for long – and it’s all the better for it. 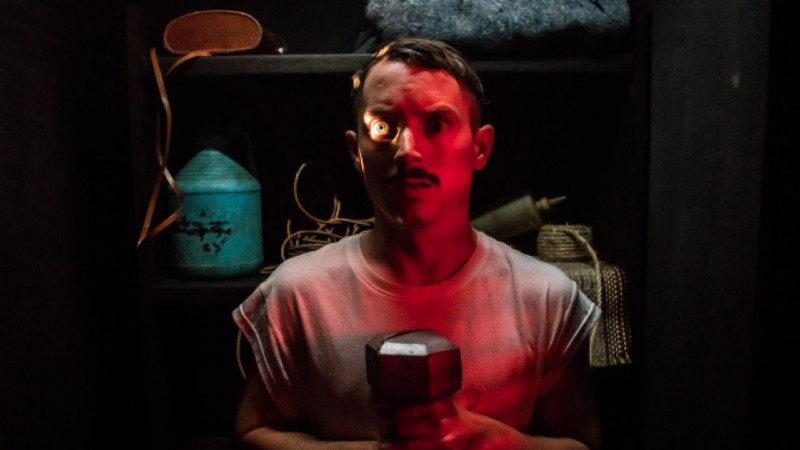 Through this journey, Norval needs to confront his feelings for his father, even though it comes at a price: terrible revelations about his own life surface. In the script, penned by Toby Harvard from an idea from Timpson, he’s a young man who’s been through hard times and who goes through life longing for something he doesn’t quite know. A wannabe musician, the protagonist is unemployed and went back to live with his mom after recovering from alcoholism and attempting suicide. Nevertheless, he sets out to meet the man who walked out on him eager to impress, a decision which will eventually land him in hot water.

Wood nails a character full of contradictions effortlessly and with a pitch-perfect body language. He goes from a heart-to-heart with his father from a comical reaction to strange noises in the house at night without skipping a beat. Amping up the humour even more, Michael Smiley’s menacing turn as bad guy Jethro is downright hilarious.

The director has mentioned in interviews that the inspiration for Come to Daddy was the passing of his own dad – and this does show. For all its antics, the heart of this feature is a son’s quest for fatherly love and reconnection. At its most dramatic moments, it almost resembles a therapy session, but when the whole it’s this laugh-out-loud funny, who cares? By tackling the grief over his father’s death, Timpson created a debut feature film brimming with life.

Come to Daddy is on VoD on Friday, February 21st.