Eugene Smith (played by a heavily bearded, grey-haired and hardly recognisable Johnny Depp) is a photographer for the now defunct Life Magazine. His work is widely respected, but his life couldn’t be more dysfunctional. He is estranged from his wife and children. He recognises being an awful parent, and he drowns his sorrows in whisky and incessant cigarettes. He’s collapsing, both physically and psychologically. He has seemingly lost his will to live and to love. Beneath all the dirt, however, is a kind and dignified human being.

One day in the year of 1971, his boss Robert Hayes (Bill Nighy) commissions him to do a job in the Japanese. He must capture the horrors of the Minamata Disease in the eponymous Japanese city. At first, he refuses, as images of WW2 still haunt him (In 1945, Smith was seriously injured by mortar fire while photographing the Battle of Okinawa). Eventually, he’s persuaded to embrace the ambitious task. He flies to Japan assisted by the interpreter Aileen (French-Japanese actress Minami Hinase), where he engages with the community and witness the horrific Disease firsthand. The neurological disorder in caused by mercury poisoning from the neighbouring Chisso Factories. The corporation refuses to pay the local for the deaths and the irreversible damage caused to their lives. The company dismissed the human suffering as mere collateral damage.

Minamata Disease caused spams, paralysis and convulsions. Victims were left severely disabled, scrawny, blind, unable to walk, speak and even feed themselves. Their fingers and limbs contorted, not dissimilar to the victims of Ring (Hideo Nakata, 1999). I imagine that the images snapped by Smith (such as the iconic Tomoko Uemura in Her Bath) influenced the aesthetics of Japanese horror. 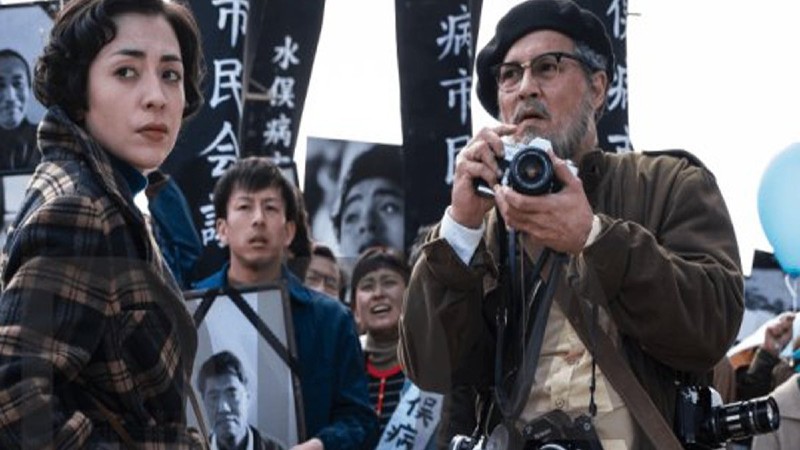 Life Magazine wished to expose the horrors of the obscure disease to the world. Smith gradually won the affection of the locals, who allowed the unpleasant American photographer to capture their intimacy. They were aware that international visibility would assist them in their fight for compensation. The thoughtless Chisso chief cynically attempts to dissuade Smith from carrying out his task by telling him that the chemicals manufactured are utilised in the photographs that he makes, amongst many other uses. Smith carries on undaunted, forcing the unscrupulous businessman to resort to more extreme measures in order to silence the American photographer.

Minamata is a powerful reminder of the devastating consequences of environmental negligence. Parallels are drawn to other industrial and pharmaceutical disasters, including Chernobyl, the Thalidomide tragedy, mercury poisoning in Indonesian mining, and the more recent Fukushima and Brumadinho disasters (in Japan and Brazil, respectively). Such tragedies are not confined to the past. This is a film that will resonate with environmentalists, or anyone concerned with the consequences of brutal and reckless corporatism.

American filmmaker and photographer Andrew Levitas directed this American-Japanese co-production, which is guaranteed to see UK distribution. That’s partially thanks to the urgent environmental message, partially thanks to the top-drawer cast (Depp, Nighy and Hinase). But the intense focus on the protagonist also cripples the film. While the role of Eugene Smith in exposing the Minamata Disease to the world is undeniable, the director’s constant interest in the photographer’s psychology prevents him from investigating the impact of the Disease on the victims and their families. At times, it seems that the people in the community are merely secondary characters supporting our wonderful white saviour.

Minamata premiered at the 70th Berlin International Film Festival, when this piece was originally written. It’s out in cinemas and VoD on Friday, August 13th. On IMDB TV on Friday, January 14th (2022).