"Dirty gem"
The pod people are back! A single mum scientist breeds a plant that will make people happy if they nurture it, in a film with strong echoes of Invasion of the Body Snatchers - now available on VoD

A vertiginous shot circling over rows of plants in a high tech, white, laboratory nursery to the accompaniment of an eerily unearthly electronic score is quickly followed by a scientific explanation. Alice (Emily Beecham) and Chris (Ben Whishaw) have genetically engineered a plant which in return for being looked after, watered regularly and talked to emits a scent which will make its carer/owner happy.

Outside of work, single mum Alice confides in her psychologist (Lindsay Duncan) her worries that she doesn’t give her young son Joe (Kit Connor) enough of her time. We sense that Alice is a control freak concerned that her “handling the unpredictable” job may include elements she can’t manage. Then she crosses a line by bringing one of the happiness plants home for Joe to nurture, naming it Little Joe. In caring for the plant, he sniffs its scent. As he becomes more and more occupied with the plant’s welfare, he neglects other things, including his hitherto beloved mother. 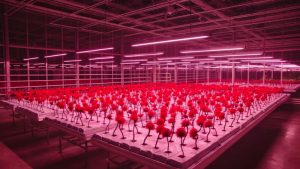 When in the same nursery as the happiness plant specimens of another plant die out, Alice’s colleague Karl (David Wilmot) asks if Alice used unauthorised methods when breeding the plants. Karl’s assistant Bella (Kerry Fox) warns that since the plants are designed as sterile, Alice may be tampering with forces of nature beyond her control: plants like all living things will do anything to reproduce. Chris is startled by Bella’s dog Bello in the nursery and accidentally inhales some of the plant’s spores. Bello later starts behaving in a hostile manner towards Bella causing her to become convinced he is no longer the same dog.

One by one, the colleagues of the workaholic Alice also change. Subtly. Each of them will do anything to protect Little Joe – which rather confusingly becomes not only the name of the plant Alice brought home for her son but also the name for the whole flower breed as well. And indeed on occasion the label for her human son. Such sloppiness is indicative of the fact that the edginess of the first half hour doesn’t quite know where to go, leaving the film to fall back on the actors’ performances, the unsettling music score and some distinctive production and costume design. All of which are, admittedly, superb. 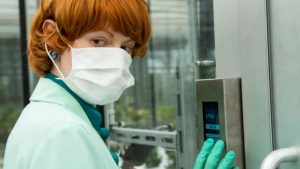 Beecham’s performance as the self-doubting. emotionally distant scientist plays in marked contrast to the actors portraying her colleagues and her son who, one by one, turn into distant relatives of the pod people from Invasion Of The Body Snatchers (Don Siegel, 1956). Instead of being physically replaced, Little Joe’s pod people are simply changed in their minds and thought processes.

In one uncharacteristically playful scene, the mother listens horrified to her son and his girlfriend telling her that they’ve been taken over by the plants, only for them to suddenly reveal that they’re having her on and that the whole thing was a joke. While most of the film isn’t quite that clever, it effectively plays out the pod people myth amongst unique visuals of spotless, high tech, clinical metal and glass interiors by people in white green-tinged lab coats to an unsettling, electronic score.

Little Joe is out in the UK on Friday, February 21st. On VoD on Monday, June 15th.

When extraterrestrial pulses threaten to destroy life on Earth, a man must travel into space to confront the suspected perpetrator: his father - now available on VoD [Read More...]