Public libraries are important public facilities. Not only do they provide an instant point-of-access for information, learning, news and culture for anyone who walks into them, but they are also vital havens of rest, quiet and warmth for many marginalised people in our society, especially the homeless. Homelessness is a big problem not only in this country but also in the United States. This film is built on a beautifully simple idea. What would happen if all the homeless people who took refuge in public libraries during the bitterly cold winter months refused to leave at closing time?

This film is constructed round this idea and both written and directed by Emilio Estevez, who also acts the principal lead Stuart Goodson, a geeky but honest man who cannot bring himself to impose on the homeless the prospect of a freezing winter night in Cincinnati, during which one man has already died. The delight, wit and incisiveness of The Public relies on how the different characters react to the homeless occupying a public building and, therefore, too much plot spoiling is not in order here.

One librarian is at the cutting edge of progressive politics and insists on travelling by public transport and always shopping organic but letting the homeless occupy the library? That’s beyond her. Josh Davis (Christian Slater), a right wing mayoral candidate, is quite convinced that this is a law and order issue and is determined to prove his ability to nip this in the bud to gain credit with the voters. So is his law enforcement assistant Detective Bill Ramstead (Alec Baldwin). 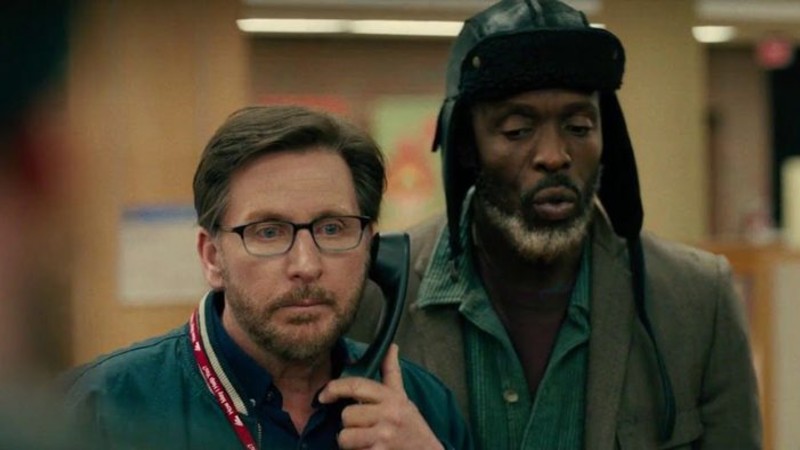 The trouble is that his son Michael is a heavy opioid user and, as he later discovers, is among the homeless in the library. Feisty news reporter Rebecca Parks (Gabrielle Union), while oozing charm and concern for the participants, is, in fact, only interested in getting that big, exclusive new break on public TV and spends a lot of time pumping up and exaggerating the story to the point of distorting it. Anderson, the library’s head, is thoroughly annoyed by the mayhem created in his library, but ultimately ends up identifying with it.

The Public challenges the viewer to take sides. Are homeless people a public nuisance? How should this be dealt with? What is it about our society that condemns the marginalised to a predictable death in freezing weather just because a public building must close at 6pm? Are these people bums and losers? Are we really the bums and losers who might have all the right views but are not over bothered if the homeless die on our streets?

It also makes another important point. Goodson says that “books saved his life”. You find out later what specifically he means by this. Estevez is raising a vital issue. In Trump’s America where facts are fake, correct information is difficult to find, where honesty and decency are often derided, public libraries are centres of information, culture and learning, open to all and concerned to enlighten. The library in this film is full of banners extolling famous literary figures, political heroes and thinkers and exhorting people to read. It may all be a bit corny and designed to promote attention (including a huge, stuffed polar bear housed there temporarily by the local museum) but the message is serious. Public facilities are meant to promote good, not bad. As Anderson (Jeffrey Wright), the library’s director declares in the film, “The public library is the last bastion of democracy that we have in this country!”

The Public rightly fulfils the mission of DMovies to present subversive and thought-provoking cinema. In its quiet way, it does just that. It’s out in cinemas on Friday, February 21st.

Doc about mysterious explosion in Colombian library is profoundly lyrical, unsettling and ambiguous, much like the inconclusive event it investigates - watch it now at home with Festival Scope [Read More...]