"Dirty gem"
Who is the lion and who is the lamb in Jon Kasbe's fearless When Lambs Become Lions? The answer may surprise you in these even-handed elephant poaching doc, in cinemas Friday February 14th

Both sides of the ivory trade are thrillingly explored in documentary When Lambs Become Lions, which has truly amazing unfiltered access to both rangers and poachers at a wildlife park in Northern Kenya. Withholding judgement while expanding perspectives, it is a great example of how the documentary form can muddy even the most ostensibly clear-cut moral cases.

Filmed in gorgeous widescreen format, elephants elegantly roam the landscape. The rangers, armed with machine guns, talk about them in reverent tones, as if they are holy creatures. They are less kind to the poachers they find hunting with bow and arrow. They throw them to the floor, kick them in the head, and threaten to kill them, making us wonder what they would do if the cameras weren’t rolling.

On the other side are these poachers, who we learn about via an unnamed protagonist. When looking purely at the facts, it’s easy to see wildlife poachers as unambiguously bad people. However he argues that he has no other choice and has to provide for his family, making him a sympathetic person despite his actions. When Lambs Become Lions does a great job of illuminating this perspective, showing us that the real issues are more structural than personal, leading up to the highest offices of the country. 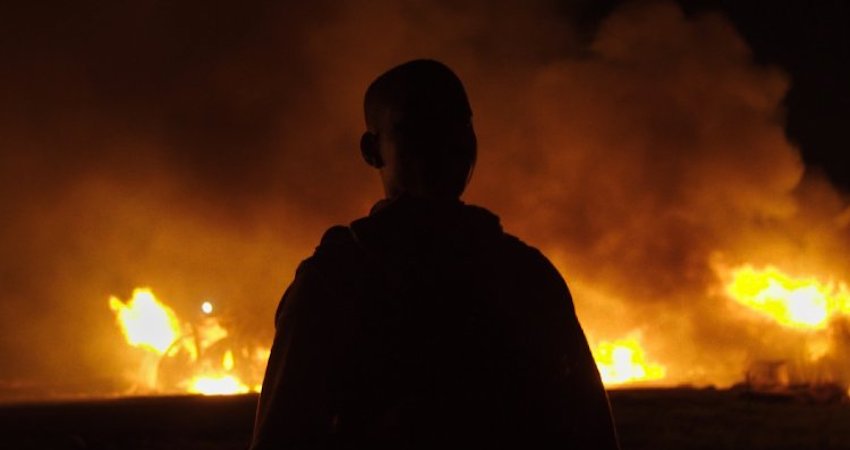 With the International Union for Conservation of Nature listing the African elephant as a vulnerable species, the ivory trade threatens to wipe them out completely. The Kenyan president Uhuru Kenyatta is serious about ending ivory poaching: in 2016, he even burned over $100 million worth of stolen ivory as a pledge to make it stop. These burning tusks form the opening of the movie, an ominous ballet of flames and smoke a symbol of the conflict’s endless violence.

Perhaps he should’ve actually sold some of the ivory: at one meeting we learn that the rangers haven’t been paid in two months. This leads to a fascinating alliance between one poacher and ivory hunter that sees them having more in common than the government might have you think. Meanwhile danger hangs over every scene, with both sides afraid of being killed by the other. Director Jon Kasbe is fearless, breathlessly joining the poachers on their hunt despite knowing that they could be killed at any moment. This results in some truly thrilling non-fiction storytelling that equals any big-budget action film.

Kasbe spent three years with his subjects, allowing us to really get into their lives. His fly-on-the-wall approach works wonders here: with no editorialising or sermonising, the Brooklyn-based director allows these two men to tell their own story. Compressed into a punchy 76 minute runtime, When Lambs Become Lions rarely wastes a frame; all leading into a paradigm-changing final scene. By the end it is unclear who is the lion and who is the lamb: revealing a grey area in-between as wide and deep as the plains of Kenya itself.

When Lambs Become Lions is in UK cinemas on Friday, 14th February.