"Mostly clean movie"
Ghost, which turns 30 years old, isn't really about grief and transcendent love at all; I'm not impressed by the classic film - back in cinemas on Friday, February 14th

Everyone has seen Ghost before they’ve seen Ghost. We all know the iconic scene where Demi Moore shapes pottery while Patrick Swayze sits behind her as The Everly Brothers “Unchained Melody” plays in the background. It’s been parodied everywhere, from Family Guy to Two and a Half Men to The Naked Gun 2½: The Smell of Fear (David Zucker, 1991). There’s a good reason it has been parodied. It’s a good scene. Cheesy, but memorable; a portrait of love that has transcended the ages.

But these parodies give a false expectation of what Ghost is actually about, which is less concerned with the transcendent power of love than a mishmash of different genres that cannot master any of them. While a huge success upon its release, winning Best Screenplay at the Academy Awards and making a mind-bending $505.7 million worldwide, the rest of the film barely shapes up to that one iconic scene.

The film is split into two key parts: before and after Sam Wheat’s death. This first part is far more engaging, with the young yuppie couple seemingly having it all yet afraid that their love is transient. Sam watches a plane crash on the TV, and states that he shouldn’t fly to LA as these things always come in threes — a false flag intended to tease those well aware of the film’s premise.

The point is that death can take us any time, and that the love we have on earth is special. Their communication at this time is tentative; with Sam — played with typical stunted machoism by Swayze — unable to tell Molly how much he truly loves her. Unpolished and unvarnished, these feel like real people. When the classic scene comes, it’s his way of saying that he cares about her, their joint caresses of the pottery wheel a symbol of the life that they want to share together.

This all changes after Sam is killed by a criminal on the street. Ghost quick jumps us through unnecessary narrative hoops instead of giving us the time to feel the immense loss that Molly must be feeling. Sam is not only literally a ghost but metaphorically too. Likewise Molly is half-formed, still waiting to be shaped at the pottery wheel.

In fact, Ghost doesn’t really get into the nature of grief at all. Instead this shaggy dog story — part comedy, part conspiracy theory, part exploration of purgatory, part action thriller — launches into a convoluted plot-line involving murder and illicit bank transactions. Therefore, Sam is not forced to try and get Molly to notice him for his own sake (which might be more moving) but to stop further crimes from being committed. 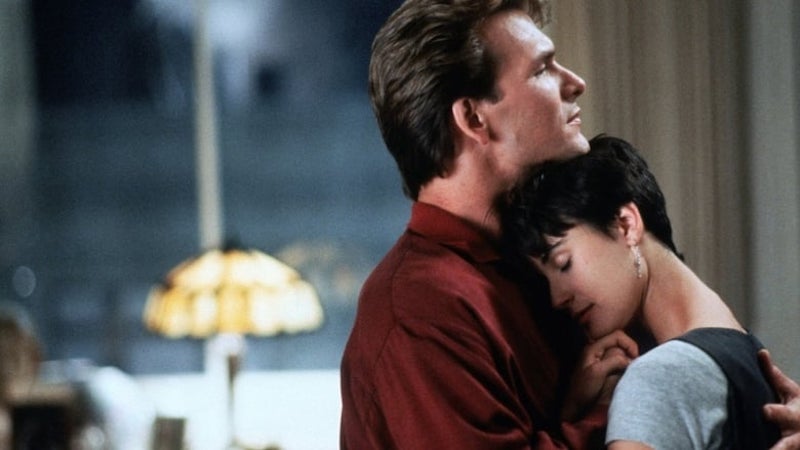 Whoopi Goldberg won an Oscar for her brilliant supporting role (only the second black woman to do so) as a spiritualist who can talk to Sam, but her character is kind of shortchanged too. As Roger Ebert pointed out in his initial review about the classic kiss scene where Sam kisses Molly through her body: “this should involve us seeing Goldberg kissing Moore, but of course the movie compromises and shows us Swayze holding her — too bad, because the logical version would actually have been more spiritual and moving.” While the former move would’ve been a better representation of the power of love to transcend anything, the second is just another classic example of Ghost changing the rules of the game for the sake of the screenplay.

This is a film completely unconcerned with logic. One moment he can’t touch anything, then he figures out that he actually can; initially she can’t hear him, then right at the end she can. These kind of manipulations take us out of the emotional journey of the characters, which ends with a typically Hollywood action climax which must’ve satisfied denizens of the Box Office back in 1990 but ruins the film’s potential as a genuinely moving work of art.

Jerry Zucker, known previously for his far wackier works as part of the Zucker, Abrahams and Zucker team such as Police Squad (1982) and Airplane! (1979), felt like the wrong director for the work, which might’ve succeeded far better as pure comedy. Anthony Minghella‘s Truly Madly Deeply (1991), released just a year later and containing a very similar premise, is the far more moving and humorous work, able to track the multi-varied emotions associated with grief with actual nuance and depth. I recommend you watch that instead.

The 30th anniversary edition of Ghost is in cinemas on Friday, February 14th.