"Dirty gem"
In this biopic of the titular president of The Philippines, Filipino actor Raymond Bagatsing remembers the leader as an often forgotten WW2 hero - in cinemas Friday, January 31st

In every large genocide, there are those who drive the horrors, while others watch it. Then there are the few who fight against it. Philippines president Manuel L. Quezon was one such rebel, cast as he was in a role of saving the lives of 1,200 Jewish people. Closing the 1930’s, Quezon (played by the irrepressibly handsome Raymond Bagatsing) countered the battles that surrounded the world with his own battles of a relapsed tuberculosis.

I’m reminded of Stanley Kubrick. Although a lifelong friend of Schindler’s List director Steve Spielberg, Kubrick’s disdain for the 1993 WW2 epic was palpable. “Think that’s about the Holocaust?” the American director famously roared. “That was about success, wasn’t it? The Holocaust is about six million people who get killed. Schindler’s List (1993) is about 600 who don’t.” A celebration of altruism has every reason to resonate as a Holocaustian picture, and that’s exactly what Matthew Rosen does here.

Aurora Quezon (Rachel Alejandro) plays the silent, doting wife in a parade of German/American army uniforms. Not exactly a celebration of powerful women, but instead a celebration of human survival. Bagatsing plays Quezon. He has a schmoozing, boozing raconteur, swathing his conversations with future US president Dwight E. Eisenhower (David Bianco) through cigarette-lit conversations. Finding refuge for his Jewish refugees wasn’t difficult; providing them with US visas proved more taxing. In time honoured tradition, Quezon entertains his guests with ballroom swings and delectable selections of choice women, while taking a solemn moment to ponder his mortality. The cameras roll nicely off Bagatsing, dressed as he is in a number of lucid white suits, never a button, lace or tie under pressure. 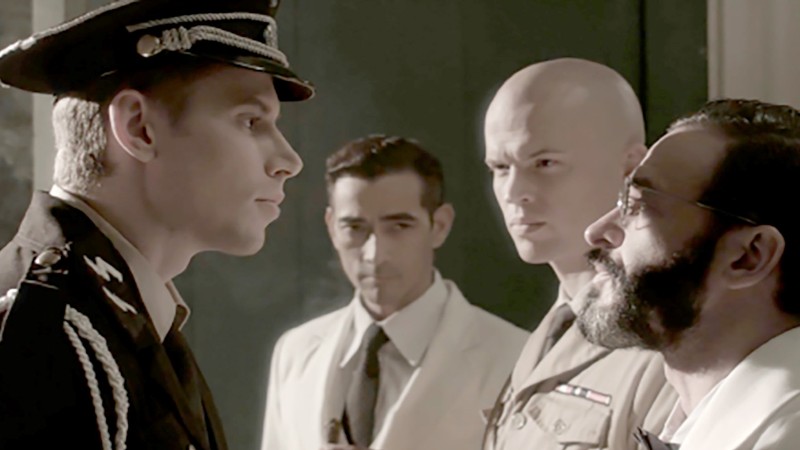 The picture is dazzlingly well filmed. Opening up on Quezon and hiw wife reeling over reels of concentration camps, the 1944 montage echoes the grey, dirty films the married couple watch. Suddenly, the film pirouettes back to 1938, riding through the cobbled streets to decorate the Philippines in all of its Technicoloured majesty. And then there’s the shocking final shot, caught as he is in a wheelchair that will roll Quezon to his untimely death.

Quezon ponders to himself how many more he could have saved, in good Schindler’s style, before Jewish singer Shulem closes the film’s credits with a soaring ballad espousing the many he did save. What sounds like a garish number from the 1980s actually works elegantly in the film.

However horrific and dreadful the Holocaust was, it is essential to remember the good that was done amongst the mass evil committed. In a time of political uncertainty and upheaval, audience members need to remember there is always hope.

Quezon’s Game is in cinemas on Friday, January 31st.

HIV-positive teen grapples with a dysfunctional family and society, in this extremely bleak yet sobering drama from the Phillipines - live from the Tallinn Black Nights Film Festival [Read More...]

Extraordinary profile of Imelda Marcos, dubbed the "Marie Antoinette" of the Philippines due to her extravagant plundered wealth, is now available on VoD [Read More...]

A rose is a rose is a drug dealer: Filipino mother has to juggle the care for her three children with her meth business, until something goes tremedously awry, and the family has to reverse roles - from Cannes to the BFI London Film Festival [Read More...]