"Dirty gem"
When a new assistant joins a seasoned keeper in an isolated lighthouse, the experience challenges his sanity  - on VoD on Monday, May 25th

The 1890s. The constant pounding of 19th century industrial machinery. Stark black and white photography in a 4:3 Academy aspect ratio. On the prow of a steamship as it ploughs through the water stand two men. They head towards an island with a light… a lighthouse. They disembark from a rowing boat.

Inside the building, the older lighthouse keeper (Willem Dafoe) instructs his new assistant (Robert Pattinson), who he constantly addresses as “Lad”, in his duties. Despite what’s written in the manual, he won’t allow the assistant to operate the light itself – he’s charged with repair and maintenance work.

They get off to a bad start when the Lad refuses a drink from his new superior, opting for water rather than whisky. Some time later though, he relents to join him in a whisky and asks that they address each other by name. The assistant is Ephraim, the keeper is Tom. Ephraim becomes increasingly unreliable. He has a run in with a gull and lobs a rock at it, an act which upsets Tom who believes that dead sailors’ souls inhabit the birds. Ephraim is sitting in Tom’s hoist halfway up the lighthouse exterior on painting duty when it breaks, causing him to fall some twenty or so feet.

He also has unnerving, increasingly sexual dreams and masturbatory fantasies of a mermaid, brought on perhaps by a combination of the isolation of the place and the small carved mermaid figurine he finds in a slit in his mattress. He finds her lying in recesses under seaweed atop rocks. He imagines tentacles passing and strange, close up shots of orifices in undersea creatures. 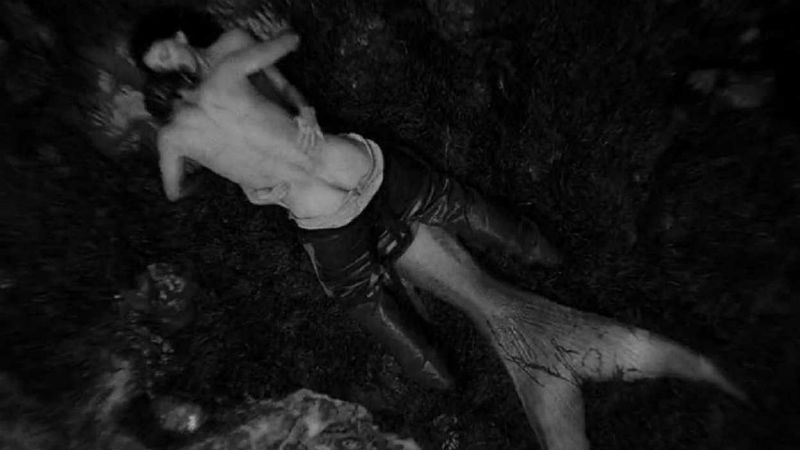 The two men’s rough period costumes and lengthy conversations in equally period dialogue over meal times and drink, the cramped lighthouse room and stairwell interiors, the harsh exteriors of rocky outcrop, gulls, mermaids, the contrasty black and white photography, the constant, pounding and pulsing industrial sound, all these elements combine to render the film a unique sensory narrative, visual and aural experience for the viewer.

It helps too that the dramatic element is grounded in two striking lead performances, but the other elements are very much in play. As the film proceeds, it becomes increasingly dreamlike and harder and harder to distinguish fantasy from reality. It’s not always clear if events are unfolding in the real world or somewhere in Ephraim’s subconscious. Like the intermittent shots rising up the spiral staircase lighthouse interior, this us not do much as descent into madness as, disturbingly, an ascent to that state as if it were a higher physical plane.

Although not that long a film, it’s highly demanding, not something to see if you’re quite tired after a hard day’s work. This is not a film that carries the viewer: a certain amount of work is required of the audience. Approach it in that frame of mind, though, and it should prove rewarding.

The Lighthouse is out in the UK on Friday, January 31st. On VoD on Monday, May 25th.

Fifty years later, cult classic is a one-of-a-kind experience, a unique take on the Western that shocks and beguiles in equal measure - in selected cinemas on Friday, January 10th [Read More...]

Luca Guadagnino's remake of Dario Argento's supernatural horror classic shares little DNA with the 1977 movie, excelling in originality and electric performances; yet it's not without imperfections - in cinemas Friday, November 16th. [Read More...]