"Filthy genius movie"
Elia Kazan's adaptation of Tennessee Williams illustrates the brutality with which society marginalises and isolates people - back in cinemas on Friday, February 7th

The film title is evocative with sub-erotic overtones. In fact, it is just the streetcar running to Desire, still a rough area in downtown New Orleans. Here is hard, proletarian New Orleans, with its honky-tonk bars, jazz clubs, African American underworld, louche and long, steamy nights. Into this world comes Blanche DuBois (Vivien Leigh), one time teacher, a faded “Southern Belle”, now penniless so forced to live with her sister Stella (Kim Hunter), who is married to the handsome roughneck Stanley (Marlon Brando), who treats Blanche with disdain. This might just seem to be a treatment of the tougher end of American working class life.

This famous 1951 movie is an adaption of the eponymous Tennessee Williams’s play, which was a Broadway hot in 1947. Far from being just a depiction of a certain area and its inhabitants, its themes are universal and stretch way beyond New Orleans. The original play, written by a gay man, is surprisingly feminist, showing how women are forced into false and fictitious roles by male oppression. Its gay undertones are obvious but remember that Williams’s text was heavily censored to suit the 1950’s. Class oppression also features, with Blanche’s fantasies about herself as a faded member of the upper classes. 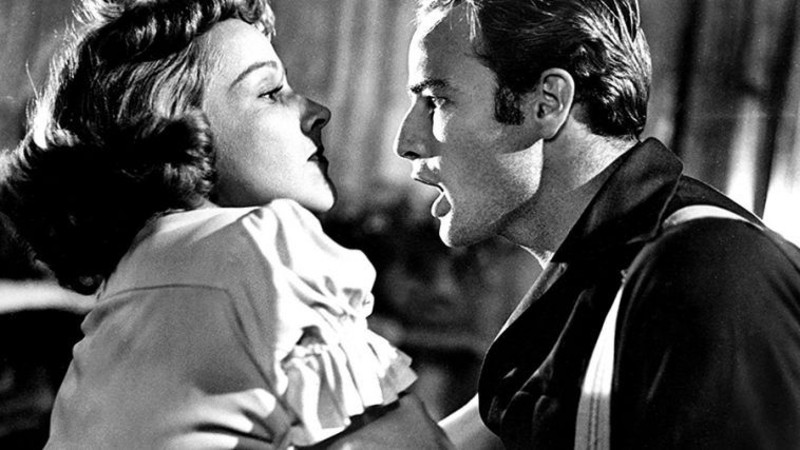 The dominating presence of Stella’s husband Stanley smoulders over the whole film. Marlon Brando gave a performance that launched his career. Stanley is unregenerate masculinity, handsome, beautiful even, but totally selfish and domineering, holding late night poker games that ruin the sleep of the women around him, including Eunice (Peg Hillias), the neighbour upstairs.

Interestingly, all significant male characters are types that may well have been familiar to Tennessee Williams as a gay man. Stanley is a gorgeous piece of “rough”, as beautiful as he is dangerous. Mitch (Karl Malden) is the desperate gay man, who has lived with his mother all his life, desperate to get married before it is too late. The pretty and gentle young man who collects for the Evening Star (Wright King), from whom Blanche obtains a kiss, is the shy type Tennessee Williams may well have known from the gay scene. Finally, Blanche’s fiancé, who shot himself after Blanche was hurtful to him one evening, is the self-hating gay man who cannot take any reproach to his masculinity.

It is not that Blanche is specifically attracted to gay men. What she is looking for is kindness, gentleness and respect in men, which seems more easily provided by gay men. Her prissy and delusional ways put most men off so she is driven to receiving them at the disreputable Flamingo Club, while holding down a job as a teacher. Eventually she is driven out of town after an inappropriate affair with a 17-year-old schoolboy. Stella is her last refuge. 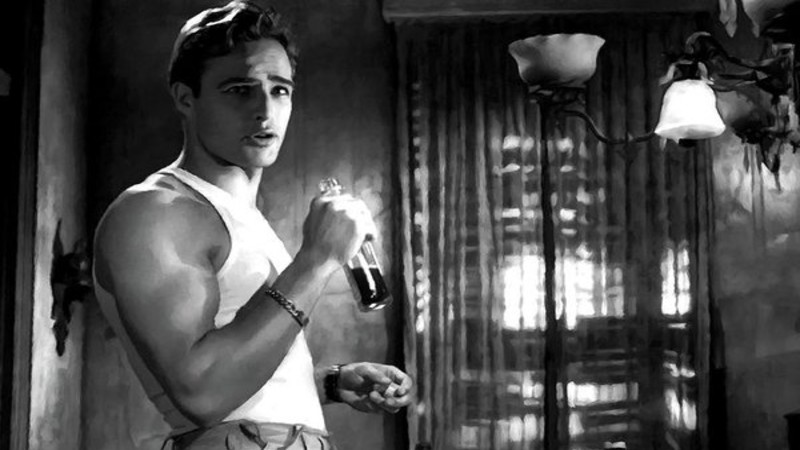 Stella, at least, has knuckled down and got on with the world as it is, however unsatisfactory her marriage. Blanche has not and things eventually unravel for her when the brutish Stanley, on the very night that his wife is giving birth to his child, rapes her. Her mind tips over into insanity and she is driven away to an asylum.

What makes A Streetcar Named Desire so outstanding is the way it illustrated the brutality with which society marginalises and isolates people just because they are on the wrong end of the power game. Women have to put up with a rotten deal because so many men refuse to give up their power and to relate properly to women. Many gay men have to live in a shadow world of desperation because society will not afford them a place. Poor Blanche copes by living in a world of class-driven illusion by imagining she is a lady”fallen on hard times but, in doing so, only removes herself further and further away from any hope of redemption. Unlike her sister, she cannot face the world and men as they actually are. All this is acted out in Stella’s cramped apartment in New Orleans, the monochrome of film noir and the sure footed direction of Elia Kazan.

A Streetcar Named Desire will be shown in selected cinemas from Friday, February 7th. Go see.

Fellini's portrayal of the ennui of the 1960s remains as current as ever, as our society becomes intoxicated with trivia, diversion and pointless celebrities - now available on Mubi [Read More...]

Acquitted by mirrors! Rereleased two thirds of a century on, Cocteau's reimagining of the Greek legend of Orpheus remains as dirtyliciously magical as ever - in cinemas from Friday, 19th [Read More...]