No Fathers in Kashmir

"Greasy movie"
British-born and raised teen develops a tender affection for Kashmir boy as they both seek their fathers who disappeared years earlier in the politically volatile region of India - in cinemas Friday, January 24th

Sixteen-year-old Noor (Zara Webb) is in Kashmir for the very first time in her life. This is where she meets her grandparents, and attempts to create a connection with a region that was hitherto entirely foreign to her. The adolescent is British/Western in every way: her accent, her attire, her obsession with taking selfies and publishing on social media.

She meets the local village boy Majid (Shivam Raina), who is of the same age, and they immediately bond. There’s a touch of teen love, nothing too graphic and extreme, palatable for a more conservative Indian audience. They find out that their respective fathers were very good friends as young men. It’s not entirely clear what happened to the men since. Most assume that they died in the violent conflict that has plagued the contested region for decades. Because of uncertainty of their real fate, their wives are often described as “half-widows”. The only one who seems to know the truth is Arshid (played by the director Ashvin Kumar), who was a close friend of the two men. But Arshid refuses to disclose any information. So Noor and Majid set themselves on a mission to uncover the truth. 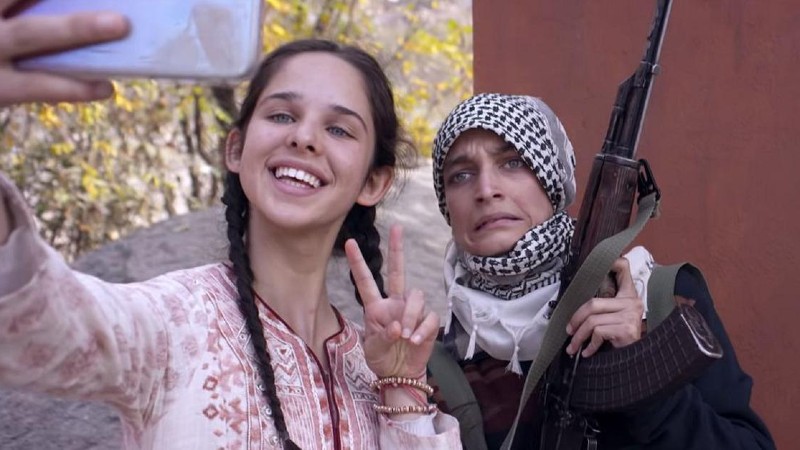 The two teens get lost in a dense forest as they search for the answers about their elusive family history. But they soon get in trouble, being arrested by patrol soldiers. This is war-ridden region with little regard for their adolescent adventure. Being British-born gives Noor an advantage over Majid, and she’s soon released. But what about the village boy, who enjoys far less rights and protections than his foreign friend?

This is a tender coming-of-age story set against a very tragic backdrop. Noor’s freedoms and joie-de-vivre are contrasted against the far less peaceful and civilised existence that the Kashmiris have to lead. The performances are strong enough to keep you hooked throughout the 108 minutes of the story. Most characters are rather flat and their psychology is easy to understand, making the narrative straightforward and borderline didactic. The only exception is Arshid, the most psychologically complex and ambiguous personage. It’s never clear what his secrets and motives are. Until he unexpectedly takes justice into his own hands…

The contextualisation of the conflict, on the other hand, is far less clear. You won’t find out, for instance, that both India and Pakistan claim Kashmir in its entirety, and that the Indian government recently revoked the special status accorded to the region in its constitution, the most controversial political move in nearly 70 years. They sent thousands of troops , thereby imposed a curfew, shut down telecommunications and arrested political leaders. It will help if you have some understanding of the conflict before you watch the movie.

No Fathers in Kashmir is in cinemas on Friday, January 24th.

When the Moon was Full

Iranian woman marries charming stranger only to find out he's a religious fundamentalist, and that her entire family could be in danger - live from the Tallinn Black Nights Film Festival [Read More...]