"Filthy genius movie"
Standing against evil. A married Austrian farmer conscripted as a soldier for the German army in WW2 is imprisoned for refusing to sign the standard oath of allegiance to Hitler - in cinemas from Friday, January 17th

Opening with and periodically punctuated by documentary footage of Hitler and the Third Reich, this is Malick’s retelling of the wartime life experience of a real life couple. Deeply in love, Franz and Fani Jägerstätter (August Diehl and Valerie Pachner) run their farm near a remote, mountainous Austrian country village. With the Third Reich on the ascendant, he gets called up for military service and is billeted in a nearby castle and trained while she, the kids (three girls) and her sister Resie (Maria Simon) struggle to manage the farm without him.

When France surrenders, many men are released from national service and Franz is allowed to go back to farm, wife and family. However it’s only a matter of time before he’s called up again. And this time, the only way out of signing the oath is to go to prison. 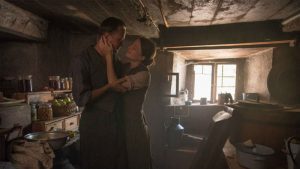 Other hands might have turned the real life history on which this is based into a pedestrian movie that wouldn’t do any favours to the memory of those involved. Malick, however, uses the couple’s written correspondence when the husband is away as the spine of his narrative so that when he hangs his images and sounds upon it, they add something to a solid story that already makes sense in its own right.

So he starts off with fields and mountains and a couple very much in love, intermittently throwing in images of family life and agriculture before showing us life in army barracks then prison. Although the whole runs the best part of three hours, it never feels like it, more like a very slow paced, leisurely 90 minutes in which time sometimes seems to stand still and the film’s content slowly seeps into the viewer. 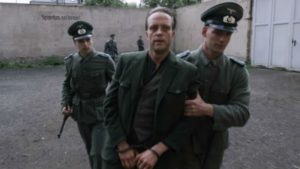 That content is, to express it at its simplest, what are you supposed to do in society when bad people are in charge? Franz wrestles with the Christian injunction to be subject to the governing authorities but at the same time to resist evil. First friends then acquaintances and finally judges tell him how much simpler his life would be if he only signed the oath to Hitler. His devastating response is that, if he doesn’t sign, he is free. A challenge to us all, especially if we find our society asking us to comply with ideas or actions which run counter to our conscience.

In retelling this story on the screen in the way that he has, Malick brilliantly expresses the numinous good and the fact that some ideas or values are so important that everything else must take second place to them, even if it means going against what most people think. This is a profoundly moving experience on a very deep spiritual level, rare in cinema. It’ll be a long time before we see another film with the same theological depth that speaks so eloquently to the problem of human suffering as this one does.

A Hidden Life is out in the UK on Friday, January 17th. Watch the film trailer below: