"Filthy genius movie"
Fifty years later, cult classic is a one-of-a-kind experience, a unique take on the Western that shocks and beguiles in equal measure - in selected cinemas on Friday, January 10th

My first encounter with the films of Chilean-French filmmaker Alejandro Jodorowsky was a complete accident. Stumbling around Bestival on the Isle of Wight as a young and impressionable teenager, I walked into a tent at midnight just as The Holy Mountain (1973) was about to begin. I had absolutely no idea what to make of the movie; all I knew was that I was in the presence of something completely unique and utterly brilliant. The random nature of this encounter felt Jodorowskian in and of itself, a bizarre coincidence that later left a huge filmmaking impression.

The deranged nature of Jodorowky’s films almost invites the viewer to be somewhat under the influence (like I was then, although just rum and not psychedelics!) when watching them. His breakthrough hit, El Topo, is no exception, a bizarre romp through the Mexican desert that shocks and beguiles in equal measure. Filled to the brim with endless rituals, symbols, animals, dwarfs, deformed people and highly mannered performances, it can be a difficult film to interpret. Seen with an open mindset however and El Topo is a highly cathartic experience, an expiation of sin through brutal violence.

Jodorowsky stars at the eponymous hero, a black-clad gunfighter wandering the desert with his naked son (played by Jodorowsky’s own son Brontis Jodorowsky). He is on a mission to defeat four gun masters to become the finest fighter in the land. With just this basic description El Topo sounds like a traditional Western, or at least a Spaghetti Western — violent deconstructions of the genre filmed by Italians directors like Sergio Corbucci or Sergio Leone — yet Jodorowsky has a completely different aim in mind, using the power of the desert’s almost endless plains to investigate the nature of human morality. 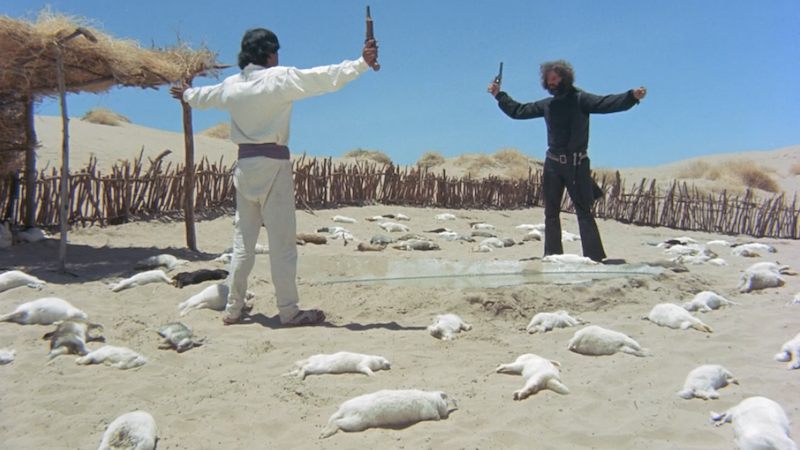 It’s ultimately a deeply religious film, albeit one that explores ideas of spiritually and faith through extreme violence. El Topo can easily be read, like the star of The Holy Mountain, as a type of Jesus-like figure, especially when he finds himself in a cave filled with outcasts who have become deformed through incest. He even quotes New Testament scripture when he asks “My God, my God, why hast thou forsaken me?” right before his hands are shot, forming wounds like that of the stigmata. Both blasphemous yet oddly affecting, it foreshadows the intense exploration of Christianity found in the films of Martin Scorsese, especially The Last Temptation of Christ (1988).

Yet the film cannot easily be interpreted as a one-for-one Christ allegory. As Roger Ebert mentions: “He makes not the slightest attempt to use them so they sort out into a single logical significance.” Unlike the similarly mannered films of Sergei Parajanov, which can probably be interpreted correctly with a degree in Eastern European studies or specialist knowledge of pre-Soviet Ukrainian, Georgian and Armenian culture, Jodorowsky’s films cannot be solved through specialist knowledge as many of the symbols more or less contradict each other. This is the key pleasure of Jodorowsky’s films and what makes them such iconic Midnight Movies. You just simply have to go with the flow, bring your own perspective to what they offer, and enjoy the experience. Intoxicants are optional.

A restoration of El Topo is in selected cinemas across the UK on Friday, January 10th.

Elaine casts a heady spell on every man meets, and viewers too are certain to become intoxicated with this modern-day witch fairy tale [Read More...]