"Mostly clean movie"
After a decade directing more family-friendly fodder, Guy Ritchie is back with a more traditional crime caper. He probably shouldn´t have bothered - in cinemas on Wednesday, January 1st

American marijuana kingpin Mickey Pearson (Matthew McConnaughey) has made a legendary name for himself in London. Looking to sail out from the life he’s made for himself, Pearson involves himself with Matthew Berger (Jeremy Strong). Investments come at a price in this “Mockney” caper, as the criminal underbelly side with the upper classes of British Establishment.

After 10 years directing the more cordial Sherlock Holmes (2009), King Arthur (2017) and Disney’s Aladdin (2019),Guy Ritchie´s returned to the very genre that made his name in the first place. Maybe he shouldn’t have bothered. Those East End tropes had tired as early as Rocknrolla (2008). There’s an arrogance to the film that won’t win him any favours with audiences and critics, though I suspect he already knows that; it might explain why a character rubbishes The Conversation (Francis Ford Coppola, 1974) as a cheap throwaway line! 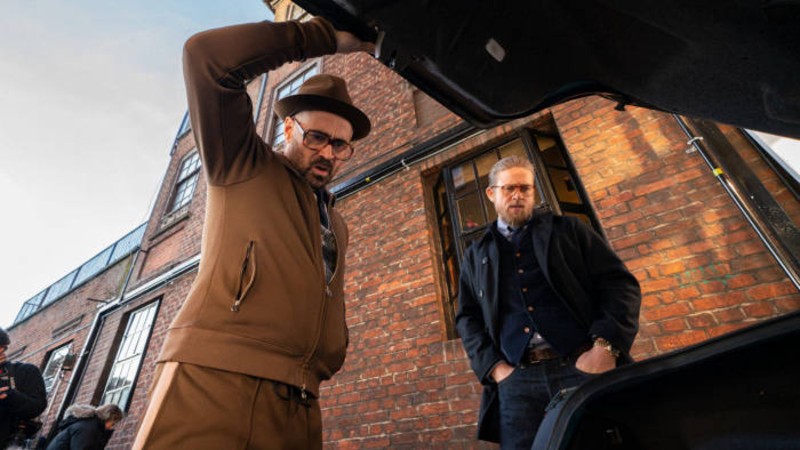 Ritchie was never a critical darling, unlike Snatch (2000) producer Matthew Vaughn, and The Gentlemen shares a glaring resemblance in palette, colour, design and costume to Kingsman: The Secret Service (directed by Vaughn in 2014). Jokes about ´Jewish gangsters´ and ´Irish boxers´ are one thing, but when Dry Eye (Henry Golding), a “Chinese James Bond”, is said to possess a “ricence to kill”; there’s a genuine six-letter word for it beginning with ´r´!

So no, this is not a good film. But thanks to one character actor, playing beautifully against type, it’s not entirely an inessential one. Since weathering in age and appearance, Hugh Grant has re-emerged in recent years as one of Britain’s most enjoyable actors. He works as the film’s narrator, spurning the narrative turns with broad Michael Caine like glee. He’s revelling onscreen with panto like glee, walking across the screen with broad, fulsome strides. It’s a testament to his ever-growing “Grantnaissance”, while McConnaughey´s Pearson adds little of value to his supposed “McConaissance”. He looks tired, bored even, in a script of Class B Hollywood material. But Colin Farrell’s a blast, revelling onscreen as a charming boxing instructor, while Eddie Marsan enjoys himself as ´The Daily Print´s Editor-in-Chief. It’s nice to see Grant, Farrell and Marsan having so much fun. Shame they forgot to include the audience!

The Gentlemen is in cinemas on Wednesday, January 1st.

The latest film by the Safdie brothers is both energetic and skilfully craft, with a highly nuanced Adam Sandler as the charming anti-hero - now available on Netflix [Read More...]

De Niro and Pesci are back in an epic countering on the reminiscence of vintage Scorsese and with an unexpectedly sombre vision of sin - now available on Netflix [Read More...]