A Serial Killer’s Guide to Life

"Filthy genius movie"
Imagine finding out your friend is a serial killer? This delicious British comedy is a coffin of evil puns - on Digital on January 13th

We’ve all had that friend, that one person who looks in every direction for an answer to their life. Lou Farnt (Katie Brayben) is that 30-year -old, surrounding her life in self-coach tapes and books, desperate for a life away from her controlling, self-satisfying mother. When Val (Poppy Roe), a precocious life coach brimming with worldly ambition, arrives in her hometown, Lou decides to travel with her. On the surface, it seems like a deal from heaven, Lou escaping the confines of her lowly town for a high-octane journey across Britain’s alternative therapy camps. Yet it’s apparent to everyone that Val hasn’t told Lou everything, as bodies start lining outside the tents the women share. It’s the kookiest script Simon Pegg never wrote, a bloody delicious one at that!

The one-liners slash through the proceedings like sharp, gut-throbbing belly laughs. Arriving at their premier camp, Lou packs the duos bags unwittingly on top of a pallid, pale corpse that sits in their boot. Their varied meditative coaches (one of them Fleabag’s Sian Clifford, discussing the horrific serenity of childbirth with a sharp Scottish accent), aroused as they are by life, are only moments, dalliances and knife cuts away from death. Together, the pair find themselves growing more and more attached to the art of killing. “You’re my best life coach” Lou attests, her mouth free from the vomit she’s just spewed. “You might be my best client” Val replies, leading her comrade to their next victim. Wicked stuff! 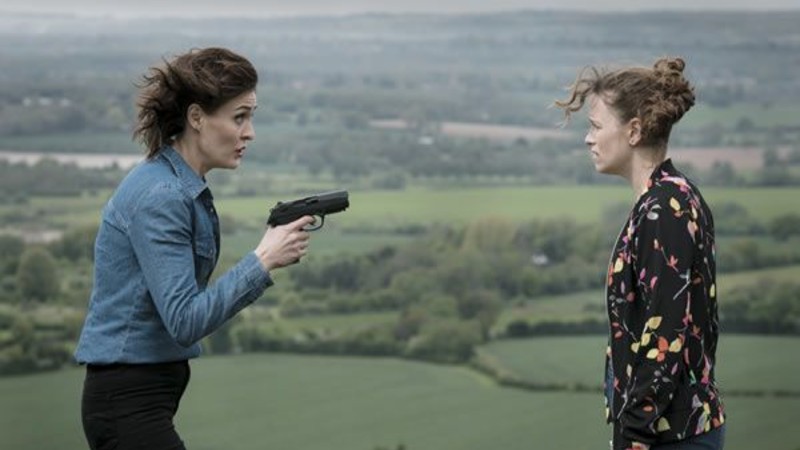 There’s a point being addressed behind all the choking and beatings. Ben Lloyd-Hughes stars as Chuck Knoah, an oily haired coach who addresses the needs of his customers with monetary, instead of medicinal, interest. Faced with the two assailants, Knoah sees the value in crime, offering his kidnappers the chance to co-author their work. In a world of Netflix serials situated on serial killers, internet videos intoxicatexd with violence and sex and family comedies that names their characters after the insidious Doctor Harold Shipman, the film addresses the sick fantasies audiences expect from the real world. Lloyd-Hughes is excellent as a scenery chewing theorist, but Roe is the real star, discussing the starved needs of Sudanese babies with the same decided measures she brings to bashing a hostess’ head with a wooden bread roller. Feisty eyed, lasso-haired and tight-lipped, Val makes one of the most exciting villains of the last 20 years. Dirtylicious!

A Serial Killer’s Guide to Life is on VoD on Monday, January 13th.