Star Wars: the Rise of Skywalker

"Mostly clean movie"
Emperor Palpatine has returned with the nefarious Kylo Ren by his side, and they are looking to control the distant galaxy - now available on VOD

R[/dropcapey (Daisy Ridley) is the last of sea of Jedi, focusing her energies, powers and stances on her work as a swordsmith. Away from her, missionaries Poe (Oscar Isaac) and Finn (John Boyega) follow a lead sent by erstwhile Jedi master Luke Skywalker (Mark Hamill), as Kylo Ren (Adam Driver) encounters a force even more evil than General Snoke.

It’s a by-the-numbers Star Wars entry, all very ordinary rather than extraordinary. And there’s something very, very wrong with that. Starting in 1977, the Star Wars episodes boasted themselves on their unpredictability, instability and irregularity awash among the many laser effects and Wookie costumes. At their best, the Star Wars series opened a number of aliens experiencing the most inhumane of human feelings. Empire Strikes Back (Irvin, Kershner, 1980) ended with an amputee agonising over his learned parentage. Revenge of The Sith (George Lucasm 2005) watched the impeccable Anakin racked with guilt over the failings of the Jedi he so blindly followed. Then there’s the excellent The Last Jedi (Rian Johnson, 2005), an elegiac painting which showed that the universe isn’t a chamber piece of good and evil characters, but an orchestra of emotions swimming inside the varied territory lines. Even the risible Attack of The Clones (George Lucas) showcased a glorious gladiatorial fight which climaxed the 2002 flick with gun heaving gusto. This puts The Rise of Skywalker in pole position as the most unoriginal, the most boring and also the weakest film. 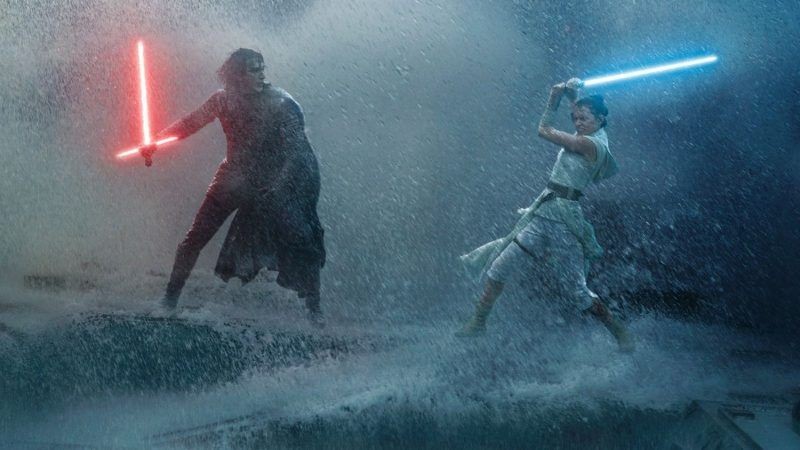 It has many, many things wrong with it. Watching the re-used Carrie Fisher footage from 2015, I felt a nauseating sense of deja vu for the Pink Panther films Blake Edwards churned out in the 1980s. This was supposed to Fisher’s entry, as The Last Jedi was Hamill’s and The Force Awakens‘ (J. J. Abrams, 2015) Harrison Ford’s. Fate played a different card, as the film changed direction as early as 2016. The 2017 dismissal of director Colin Trevorrow furthered the distance from original idea to fan-servicing, with Abrams’s reinstatement as director the final whistle to that particular tolling bell. Unlike Rian Johnson’s more measured approach, Abrams’ is frequently overshadowed, rather than guided, by his inner fanboy. His re-introduction of Lando Calrissian (Billy Dee Williams) comes shimmering in solely for the cheering salute of the fans who recalled the ship steering hero in 1986.

Nothing in the film feels subtle, an unusual thing to criticise a sci-fi film, but there’s little of substance to the proceedings. When Rey finally discovers her heritage, after three films of searching, the answer feels anticlimactic, unfeasible and insultingly predictable. Returning Emperor Palpatine (Ian McDirmid) is fan servicing at its worst, although credit to McDirmid, he gives a steely performance absent from Driver’s flatter portrayal.

Star Wars: The Rise of Skywalker is in cinemas Friday, December 20th. On VoD in March.

Jeremy Clarke unearths the dirt in Disney's latest addition to the lucrative Stars Wars trilogy, and hazards a guess that the saga will continue for a very long time - in cinemas from Thursday, May 24th [Read More...]