Ballerina Victoria (Francesca Hayward) leads a troupe of feline singers, dancers and acerbic entertainers through a ceaseless song selection, paraded over a series of matchless designs and acrobatics. Whatever plot the Jellicle Cats face is hard to decipher (the story more or less revolves around a tribe of cats who must decide which one will ascend to the Heaviside Layer and come back to a new life), but that’s a small matter in a kaleidoscopic spectacle, detailed in one long dance through the Edward Hopper tinted town streets and skyscrapers.

Cats might be the bravest, boldest and battiest picture that’s come this barmy year, and the kinkiest too! Everywhere, latex linen suits wade in the viewer’s eyesight, crotch capers carrying the eye-line of the camera’s attention. Sleek, the myriad dancers parade with gutty gymnastic poses, throwing each of their bodies into the multi-colored routines. The songs come interchangeably, frivolously feasting on their nonsensical verse and costumes. Exquisitely produced, the song’s take a sombre, affecting turn during Grizabella’s (Jennifer Hudson’s) Memories, an ageing elegy sung as the spinning camera eyes the falling debris that surround the commune of cats. This is visual art, shades of Metropolis (Fritz Lang, 1927) and Blade Runner (Ridley Scott, 1982) hanging on the architectural designs. 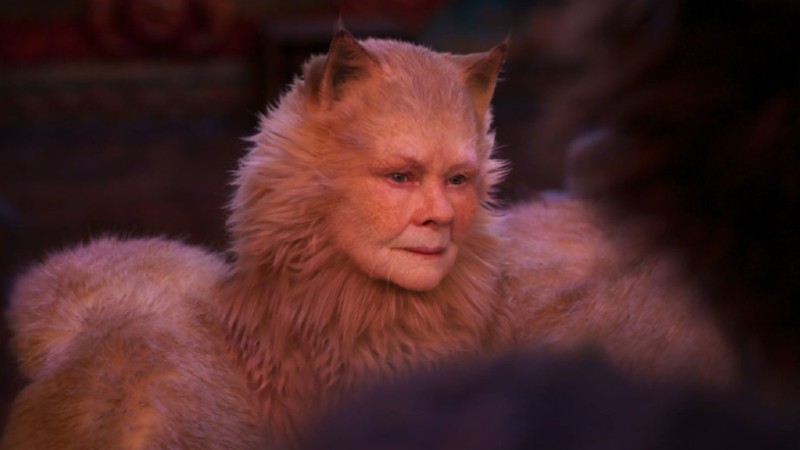 It’s an impressive cast listing, venerable custodians of the stage (Ian McKellen and Judi Dench) parading with the prescient pop artists of the millennial world (Taylor Swift, Jason Derulo and James Corden among the cast list). Parading in delightful nonsense, the catchy collection of cats emerge in the linen gutter filled paths, as others dine with cutlery items larger than the diners themselves. It’s utterly, joyfully offbeat, an illustrated adaptation of the wackiness T.S. Elliot intended for his creations. Behind the furry felines sits Idris Elba’s Macavity, purring in his criminal ambition. Elba’s resume has rarely shown such propensity for pantomime, eager in clawed posts to wander the variegated set pieces with playful rigor.

Through a Camp collection of colourful cuts comes the most exciting and invigorating of dance set pieces. In its own way, it’s the purest translation of musical theatre, expressing the animal atmosphere both the West End and Broadway productions produce. The costumes take centre stage, an overture of textures, colours, carousels and captures, a vehicle of fur for its centre cast. Clandestine changes of colour and choreography take precedence over semblance of plot. Instead, its the glorious engagement of vaudevillian value in all of its seductive permutation. Slick, shiny, sexy, colourful, creative and camp!

Cats is out in cinemas on Friday, December 20th.

Still just a cat in a cage: despite all their talent, saxophonists Ben Webster and Dexter Gordon faced a tormented life of addiction, even as they went into self-exile in Denmark - film is part of the Doc'n'Roll Festival taking place right now [Read More...]