"Filthy genius movie"
A detective with Tourette's attempts to unravel a housing corruption mystery in 1957 New York City, in this magnificent literary adaptation - in cinemas from Friday, December 6th

It’s taken Edward Norton 20 years to adapt Jonathan Lethem’s novel Motherless Brooklyn for the screen, but it’s been worth the wait. Norton is best known as an actor, but his talent clearly extends a long way outside of that field – as well as being the lead, star actor here, he produced, wrote and directed, fulfilling all these duties as well as you can imagine any four separate people doing. You can sense the time that’s gone into this: the loving period detail, the feeling that the script has marinated so that the characters have a real depth to them on the page, the superb music score. There is a palpable sense here that you are watching one of the great private eye movies. Actually, there’s more than that… although this is a period piece, it feels very much about where we are now. 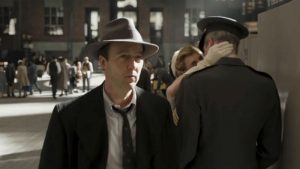 New York City, 1957. Lionel Essrog (Norton) works for Frank Minna’s detective agency. A confident, safe pair of hands, Minna (Bruce Willis) has taken a chance on Lionel who suffers from Tourette Syndrome. Someone will say a word or make a gesture and it will set Lionel off. He just can’t help it. Most people would regard Lionel as an unemployable misfit, a drain on social resources. Frank sees his potential. Lionel’s head detects patterns, makes connections, won’t leave puzzles alone until all the pieces that don’t quite fit have been assembled into a coherent whole. Lionel is now an invaluable asset on Frank’s crew.

So when in the opening minutes Frank goes to a meeting which leads to a car ride which ends in his death, the circumstances and background worm their way into Lionel’s subconscious and force him to investigate, ponder and try to make the disparate pieces fit together. Somewhere in the puzzle, an unseen member of numerous committees at City Hall, lies the power behind the city’s planning department, visionary developer Moses Randolph (Alec Baldwin, the actor who among other roles is known for satirising Donald Trump on Saturday Night Live) who thinks nothing of demolishing areas where poor people live to further his idealised metropolis of the future. It’s simply collateral damage. Moses is contrasted with Paul (Willem Dafoe) who looks like a tramp but turns out to be a trained architect fallen from grace and the brother of Moses, with whom he has profound disagreements about urban development and the way people who live in a city should be treated. 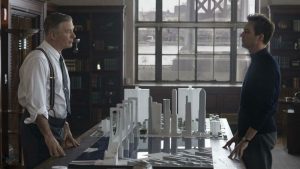 Lionel’s investigations lead him to a woman named Laura Rose (Gugu Mbatha-Raw) at the Committee Against Racial Inequality in Housing. She drags him to a Harlem jazz dive where he discovers the music to be a liberating experience; if his Tourette’s is normally a cause of social embarrassment, here he finds himself involuntarily singing scat and impressing the players on the stage. He and she connect on the level of outsiders – he because of his so-called disability, she because of the colour of her skin. Eventually he will work out for himself her place in the complex puzzle his head is putting together. 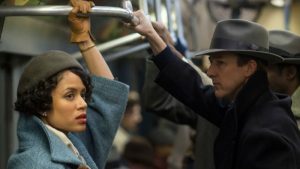 Everything about this film – from its broadest brushstrokes to its finest detail – is magnificent. Nothing is here that hasn’t been considered, from Dick Pope’s satisfying noirish cinematography to a period jazz score with a contemporary urban edge involving legendary trumpeter Wynton Marsalis, composer Daniel Pemberton and a demo (of his song Daily Battles) by Radiohead frontman Thom Yorke. Norton’s vision is so strong and so detailed that he elicits and encourages incredible work from his well chosen team be they in front of or behind the camera.

More significantly though, the film is about something very important: ordinary people at the bottom of the pile, with their weaknesses and idiosyncrasies which make them human, doing the best they can. Perhaps even making a positive difference. And, at the other end of the social spectrum, the rich and powerful who walk all over them without seeing themselves doing anything wrong. It’s a US movie which clearly speaks to an America run by the despotic, racist and sexist Trump. The film doesn’t appear to be conceived that way – it was in development way before Trump was even a presidential nominee – it’s just that as a movie coming out now it seems to fit the place in which America currently finds itself. It likewise seems appropriate as a comment on the wider world right now. As for Britain, currently in the throes of a general election where the incumbent Tories appear to care little for truth in their duplicitous and deceitful campaigning, ordinary damaged heroes like Lionel who fight for human dignity as best they can are exactly what we need. The movie of the moment. Go see it as soon as you possibly can.

Motherless Brooklyn is out in the UK on Friday, December 6th.

An innovative, 12-minute one-reeler made with musician Thom Yorke of Radiohead is in cinemas from Wednesday, June 26th and on Netflix from Thursday, June 27th [Read More...]