Letizia Battaglia followed a most dangerous career path – capturing the life and crimes of the Mafia in Palermo, Sicily’s capital. John Gotti may have loved celebrity, but none of the Mafiosi from the old country appreciated a young, brazen woman confronting them with a Pentax. ‘If he could, he would have killed me’, Letizia remarked of Luciano Leggio, a leading figure of the Sicilian Mob.

Her work, presented in stark monochrome, depicts death and suffering in the arresting style of Don McCullin and Philip Jones Griffiths. Thematically, however, Letizia’s work may share more with that of Alexander Gardener, who used photography – then in its infancy – to confront the public with the horrors of the American Civil War.

This is what compelled Letizia to take some 600,000 photographs for the L’Ora newspaper – to shatter any romantic notions of the Cosa Nostra by depicting the rank brutality of their war on civil society. And it worked, her catalogue of dead men, women and children made a powerful impression on the people of Sicily, driving support for the heroic anti-Mafia judge Giovanni Falcone. 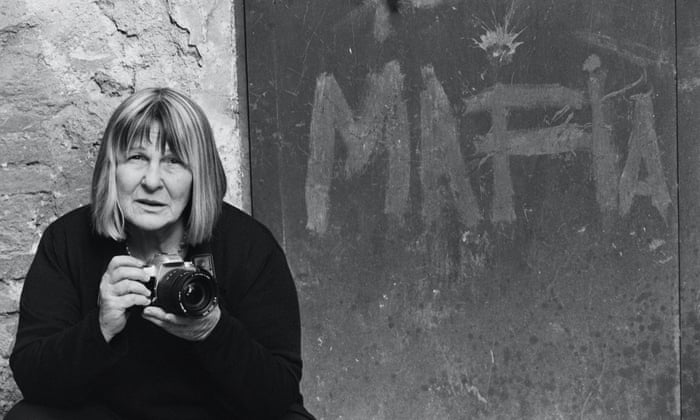 Shooting the Mafia isn’t just an organised crime documentary, though. It is the story of a girl and woman making her way in Sicily’s patriarchal society. Longinotto presents her subject in an intimate, engaging way, placing Letizia’s narration against a combination of stock and archival footage to tell her story.

However, this look into her personal life can overstay its welcome. Letizia’s early life is given a quaint, romantic quality, yet the continued emphasis placed on her later relationships can be of dubious interest. After all, it is her association with organised crime that makes her interesting, not her love life. Yet, despite this, there is a resonant tenderness about how she and her lovers talk about what their relationships meant. There is no acrimony, just an open discussion of why things transpired the way they did. It’s a reflection of the contentedness that can come with age.

Her work in public life makes for the most interesting viewing, though. Letizia states the importance of having a clean political system and she is absolutely right. Corruption is the harbinger of dysfunction, destitution and death. And the man who took the fight to the Mafia – Giovanni Falcone – was a hero. When asked about his life-risking commitment to the state, he answered, ‘it’s not about state, it’s about society’.

And the island society he was trying to save was wracked with terrible violence. ‘We’d never known violence like it, there were 1000 murders one year’, Letizia recounts. She confronted this menace head-on, documenting as many crimes as she could. Indeed, it was the photos she didn’t take that ‘hurt her the most’.

Shooting the Mafia is in UK cinemas on Friday, November 29th.