"Greasy movie"
Craig Fairbrass stars as a highly manipulative personal trainer, in this standard British thriller set in Newcastle - on BFI Player; on Sky and NOW on June 1st

This is a movie packed with a toxic mixture of testosterone and steroids. Simon (Cavan Clerkin) works in a call centre cold phoning prospective clients in search of their credit card number. He has a pretty partner and stable home, yet monotony seems to have taken its toll on him. His small beer belly epitomises both his passivity and frustration. So he joins the local gym, in an attempt to inject some vim and vigour into his life.

The highly intrusive and aggressive personal trainer Terry (Fairbrass) approaches Simon almost immediately, telling him that he’ll quickly cripple himself if doesn’t learn how to lifts weights properly. The 55-year old Eastenders and Rise of the Footsoldier star here plays the character he knows best: the tough guy/manipulative conman. The inexperienced Simon is easily persuaded, and soon takes up Terry’s “services”. He’s virtually forced to take steroids, making him fickle, irritable and violent. As a consequence, his partners simply packs up and leaves, and he also loses his office job. 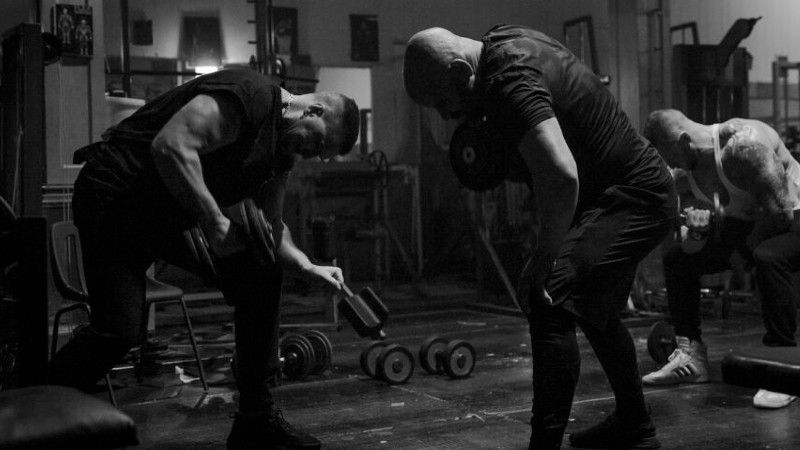 Terry is highly volatile and outburst-prone. Expletive-laden rants and threats are the norm. He does not allow Simon to make decisions. Fairbrass’s character represents a grotesque type of hyper-masculinity that’s incompatible with modern conviviality. Yet he’s strangely enticing. Even seductive. Perhaps this bromance could develop into something else. Something sexual? Something lethal? Or could this erratic lifestyle slip into criminality?

This 109-minute black and white thriller has enough twists and turns to keep you guessing the nature of Terry’s elusive personality and also of his relationship to Simon up until the very end. Plus the photography of the barren and lifeless suburbs and industrial estates of Newcastle makes for gripping viewing. This is a movie satisfactory enough for fans of British thrillers/neo-noir. But that’s about it. It has little to offer in terms of innovation, and mostly sticks to trite old formulas.

Muscle showed in Competition at the 23rd Tallinn Black Nights Film Festival, when this piece was originally written. It’s out on BFI Player in January 2021. On Sky and NOW in June.

Rise of the Footsoldier 4: Marbella

Craig Fairbrass delivers a great performance as the terrifying Essex lad, in crime drama about ex-con who travels to Spain in search of drugs for his Southend nightclub - in cinemas sand digital on Friday, November 8th [Read More...]