"Dirty gem"
Biopic of slave-turned-abolitionist Harriet Tubman details the struggle of Black Americans on their way to freedom, and it's a film that all people should see - now on VoD

This is a celebration of the life of Araminta Ross, a slave in Dorchester County. She escaped her enslavement and adopted her freedom name “Harriet Tubman”, becoming the most celebrated conductor (guide, saviour) of slaves on the Underground Railroad across the Mason Dixon Line. She conducted about 70 individuals to freedom. She was the first woman commander to lead an armed assault in the American Civil War and later settled in New York State, devoting herself to the cause of female voting rights and her religious beliefs. This is a story that needs to be told – especially to white people.

The role of Harriet is carried off with an all-consuming passion by Cynthia Erivo, who keeps herself firmly in the centre of the film. The movie refers to the historical aspects of Harriet’s life . When she was young, she was accidentally hit by a two-pound metal weight on the head thrown by a slave owner at another slave, who was trying to escape. This left her with blinding headaches and strange visions. They formed part of her lively relationship with God. The visions gave her strength and even, sometimes, God’s instructions. 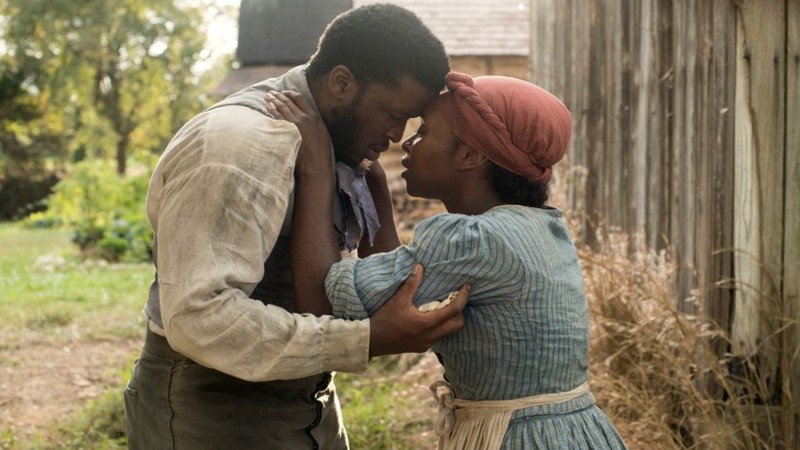 She and slaves she is conducting are rushing towards a river. To cross the river the slaves can gain their freedom but many of them can’t swim. The slave owners are coming up fast behind with their guns and dogs. What are they to do? Harriet falls down in a swoon. “She’s talking to God,” explains one of the leaders. She comes out of her faint. She stands up, “Ok. This way – to the left!” and off they go to freedom. This may perplex many with modern sensibilities, but this is how she worked.

The visions, as depicted in black and white in the film, are themselves instructive, illustrating the terrible, casual cruelties of slavery, the forcible separation of families, spouses dragged away from each other, children snatched out of their mothers’ arms to be sold off elsewhere. If you look at the original photographs taken of Harriet Tubman towards the end of her life, you can see she was a woman who did not allow anyone to treat her badly She suffered and her story needs to be told to Caucasians. This is black and feminist history gone mainstream. Hollywood has repaid a debt that has been long outstanding since Birth of a Nation (DW Griffith, 1915) and Gone with the Wind (Victor Fleming, 1939).

Harriet – which was directed by black female director, Kasi Lemmons – is in cinemas across the UK on Friday, November 22nd. On VoD in April.

Aretha Franklin's performance from 50 years ago is soulful and uplifting, reminding us that music transcends religious traditions - now available on VoD [Read More...]