"Dirty gem"
A bungling bunch of cops take over a fast food chicken restaurant to watch a gang of criminals in the building opposite in this hilarious, South Korean genre-bender – from the London Korean Film Festival

Radio voices. “Target in position.” “Unit 2 on roof.” Four criminals in a dimly lit apartment playing Mahjong. A knock at the window. A raid. But embarrassed lady cop Jang (f) (Lee Hanee) and her male boss Captain Ko (Ryu Seung-yong) can’t operate their window cleaning slings. The cliched, action packed raid by SWAT in which the criminals are swiftly arrested is visualised by the villain, but the actual police operation is a series of hilarious bungles, the criminals only “caught” when one of them is hit by a coach and the others are stopped by the resulting multiple car crash pile up. In a brutal debriefing with their chief, Captain Ko loses his position to young rising star Captain Choi, who’s just successfully caught a major criminal gang.

In order to save their reputation, Ko’s unit set up surveillance on the gang’s apartment where Hong and his men are awaiting the return of big boss Mubae (Shin Ha-kyun). There being a Chicken restaurant opposite, the cops take it over as a cover to watch the criminals’ premises. It turns out that one of their number Ma (Jin Sun-kyu) has an incredible family recipe for Suwon Rib Marinate Chicken which is an immediate success and overnight turns their fast food joint cover into a hugely profitable business. The team discover the joys of running a food emporium except for Young-ho (Lee Dong-hwai) who finds the others are becoming to busy too fulfil their police duties and back him up when needed. 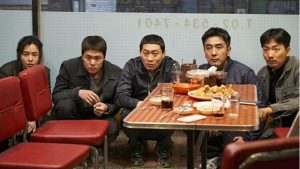 Other memorable characters include merciless, ruthless and highly effective, female fighter Sun-hee (Jang Jin-hee) who uses a knife to put Hong on crutches on a whim from Mubae and rival gang leader Ted Chang (Oh Jung-se) who threaten to atart a turf war with Mubae.

Starting off as a lightweight caper, this is one of those movies that effortlessly shifts genre throughout, from caper to violent actioner to comedy to food porn and back again innumerable times. It’s aided no end by a clever soundtrack by a composer who understands the effect different pieces of music have on the audience, from the opening pizzicato caper strings to the closing titles which sounds like a spaghetti Western. Somewhere in the middle, a wounded character who may die is briefly underscored by the cantopop song from Asian mega-hit gangster outing A Better Tomorrow (John Woo, producer Tsui Hark, 1986). 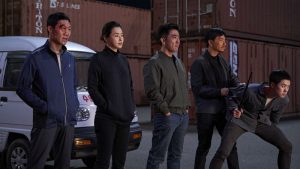 As if this wasn’t already a huge crowd-pleaser, for the climactic fight sequence it reveals that Ko’s five man team are, for example, a Chinese national Judo champion (Ma), an Asian Muay Thai champion named Jang Bak after Ong Bak (Jang) while he himself has the nickname ‘Zombie’ because he’s sustained 12 stab wounds and just doesn’t die. These and other attributes are pressed into service with Ko taking bullet after bullet in pursuit of Mubae. This South Korean gem is proof positive, if it were needed, that even for the kind of entertaining movies on which it prides itself, Hollywood really isn’t the only game in town.

Watch the film trailer below:

A not so happy family. A little girl and her brother must decide which parent each of them wants to live with when their mum and dad split up – from the London Korean Film Festival [Read More...]