"Greasy movie"
A not so happy family. A little girl and her brother must decide which parent each of them wants to live with when their mum and dad split up – from the London Korean Film Festival

Their dad Seung-won (Lim Hojun) hasn’t been around much recently. Then he and their mother Yoon-hee (Kim Hye-young) break it to their two kids Su-min (Moon Seung-a) and her slightly elder brother Jin-ho (Choi Jun-woo) that they’ve decided to split up and live apart. The question is, which of the two parents will either or both of the kids live with afterwards? Rather than fight over them, the parents leave it up to each of the kids to decide that for themselves.

Their mother is an ambitious teacher who pushes her students hard. Their father is much more relaxed aboutsuch things, so that’s one difference between the two right there. Jin-ho is studying with his mum at her school for his own exams, so it’s likely that he would move in with mum rather than dad. That just leaves Su-min, but she’s totally conflicted about which way to go.

If she lives with mum and elder brother, she has the advantage that she and her sibling are living under the same room. The two kids get along pretty well, so ther’s no reason why she wouldn’t want that. On the other hand, she likes dad a lot too. And she has problems understanding the fact that the relationship has broken down. Can’t they just get back together again?, she asks. 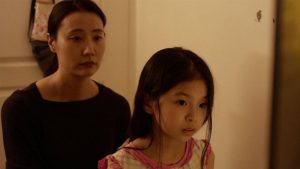 We never see Jin-ho that much outside the family unit (although we see him studying for exams with mum) but we see quite a bit of Su-min playing with Yu-chan, a boy of around her own age. Dad has given Jin-ho a drone for his birthday, but he’s so busy with exams that it’s Su-min who borrows it and plays with it.

After the overbearing Yu-chan takes the remote out of her hands to have a go then gets distracted and crashes and damages the drone, the understandably upset Jin-ho shows remarkable patience and forebearance to his sister, even going so far as reapiring the damaged drone so she can play with it again. He seems to be good at dealing with people and we suspect that he’s goig to be okay dealing with his parents’ break up.

Su-min, however, finds it all much more difficult. She’s very keen to go on a trip to Lake Park with the family if a bit miffed that her brother will stay behind to study. A family discussion goes in her favour, perhaps taking a little it too much advantage of Jin-ho’s good nature: the parents decree that whoever Su-min decides each of the two kids should live with, that’s the way it’ll be. She can see that her brother will likely end up with mum, but as for herself she finds it impossible to decide one way of the other. 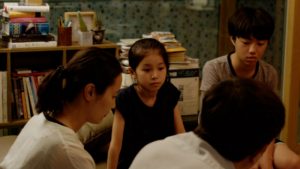 All of which leads to a family trip in the car where she goes missing and parents and elder brother search for her. There’s no point in a spoiler to explain how it all works out – or doesn’t – but this is not really the sort of film where that’s a big deal – it’s a drama based around the characters, particularly the little girl, not a plot in need of resolution. Suffice to say, the film ends at a very interesting place which is utterly consistent with what it’s about.

The shooting style is deceptively simple – a handheld camera following characters around their home or in odd locations like the school, the car, the park, or playing in the nearby streets. It unfolds at a gentle pace yet you can feel the issue of the impending separation pressing in on Su-min and affecting her young life. In the end, it’s a striking portrait of a young girl dealing with issues she’d rather she didn’t have to face at all. It played prfectly well to an audience of adults as the closing LKFF film, but this is also a film that some children might well enjoy with their parents too – although it’s a long way from being a children’s film as such, confronting as it does with some quite tough, grown up relationship issues.

Watch a clip below:

A woman with a laptop sits in a cafe observing and writing as individuals and couples come in, talk and go out – from the London Korean Film Festival [Read More...]