"Dirty gem"
That's the way to do it! Puppeteers Mr Punch and his wife Judy are reimagined as residents of a 17th century town in this bold, Australian outing - now available on VoD

Seaside. Nowhere near the sea. A small town in the 17th century where allegations of witchcraft are regularly punished by torture, confession and stoning and the local Constable is an ineffectual ninny.

However all that is forgotten at the town’s palace of entertainment to which local celebrity Mr. Punch (Damon Herriman, also in The Nightingale, out next week) and his wife Judy (Mia Wasikowska) have returned with their popular puppet show featuring his puppet as a gleeful wife-beater and hers as his spouse, dutifully trying to protect their baby. 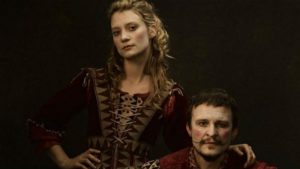 In the daytime, Punch is perfectly happy to be he who casts the first stone at an official stoning of paraded, accused, so-called witches while his missus is rather less enthusiastic. She has been trying, none to successfully, to wean him off the evils of drink, but the competition in the form of local woman of ill repute Polly (Lucy Velik) tempting him down the local boozer is proving too much for him to resist.

Home life is difficult: he hates their loyal but ageing caretaker couple and is so useless at looking after their baby girl that at one point the infant almost crawls into a blazing hearth fire. 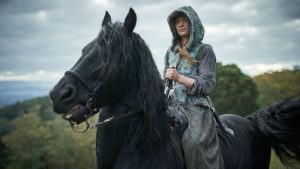 When family circumstances worsen, Judy leaves Punch and falls in with a mainly female group of dissenters camping out in the woods. This Judy may have been thrashed within an inch of her life by her soused husband, but she’s had enough and is now working out how to fight back.

This is impossible to accurately synopsise without spoilers (hopefully I’ve given nothing away). It’s also filled with riotous detail – pub brawls, public hangings and stonings, official Ruffians who practice their violent law enforcement work whether the Constable agrees with their methods or not.

For generations of Brits, Punch and Judy as performed by a seaside puppeteer in a small vertical tent are indelible archetypes from childhood, along with the baby, the policeman, the dog, the string of sausages and the crocodile. Aussie director Mirrah Foulkes completely understands these figures, skilfully exploiting them to very specific narrative ends. She conjures a terrifying fantasy land where freedom confronts bigotry even as everyday folk marvel at the magic world brought to life by theatrical puppeteers. 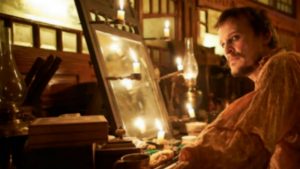 As such, this plugs right into some powerful myths buried very deep in the British psyche then plays around with them to great effect. For anyone who grew up with the terrifying Mr. Punch, his much put upon wife and child and all the rest, this is essential viewing. And coming a week ahead of likewise impressive The Nightingale, it suggests there may be something of a wave of Australian fantastique at the moment.

Judy & Punch is out in the UK on Friday, November 22nd. On VoD in March.

Boy meets girl. Alas, girl is in a psychiatric hospital convinced that the world is out to get her... in this filthy genius Belgian movie – from the BFI London Film Festival [Read More...]

One, two three, eyes on me! A resourceful kindergarten teacher keeps her school trip under control when they unexpectedly encounter hordes of flesh-eating zombies - now on VoD [Read More...]