China’s White Snake legend has spawned numerous adaptations including the recent, animated White Snake / Baishe: Yuanqi (Amp Wong, Ji Zhao, 2019) which boasts fast paced action and state of the art CG visuals. Tsui Hark is from another era: the legendary Hong Kong director who almost single-handedly bought Hollywood-style special effects to Hong Kong movie production in such epics as Zu: Warriors From The Magic Mountain (1983) and the Once Upon A Time In China films (1991 onwards) alongside period romps like Peking Opera Blues (1986). For Green Snake, Tsui turned to Lillian Lee’s novel based on the White Snake legend which she adapted into a screenplay for him. Rather than tell the story from the perspective of the white snake as the original legend does, Lee shifts her narrative to the perspective of the younger, less experienced green snake. 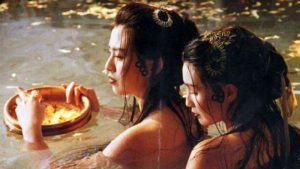 In appearance, the two spirits start off as female humans down to the waist and snakes below, not dissimilar to Harryhausen’s half woman/half snake Medusa in Clash Of The Titans (producer and effects: Ray Harryhausen, 1981) but using full size puppetry/animatronic effects rather than stop frame animation. Because they want to enter the human world and experience romantic, sexual love, the two snakes transform themselves into full body, beautiful women.

Older white snake Bak Sei Juan (Joey Wang) and green snake younger sister Siu Ching (Maggie Cheung) initially leave their spirit world home and descend from the roof of a house in which Indian girls dance. Soon the pair swim their way up river to a more Chinese period village that could have come straight out of the Tsui-produced A Chinese Ghost Story /Sien lui yau wan (Ching Siu Tung, 1987, in which Joey Wang played an attractive ghost) where they both ingratiate themselves with a local scholar Hsui-Xien (Wu Hsing Kuo) with white Bak Sei intent of having his children while green snake Siu Ching goes off to seduce a Buddhist monk Fa Hai (Vincent Zhao) – whose two hundred years worth of studies have allowed him to run through the air and master various other physical and spiritual abilities – intent on banishing the pair from the human world back to the spirit world. 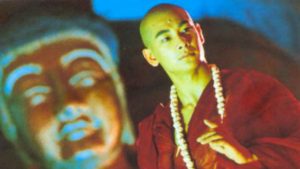 As you might expect from the director who in Zu: Warriors staged a priest keeping a demonic asteroid at bay using several thousand yards of eyebrows, Green Snake boasts extraordinary set pieces. These vary from shots of the two girls cavorting naked in a period hot tub (not that they reveal anything much, but the images positively drip sex) through various gigantic snake tails swishing about through water or in the air, epic airborne battles with the flying monks and a finale in which the monk’s red clothing is transformed into a vast shroud with which he and a magic crane which suddenly appears from nowhere battle the two flying snake women. 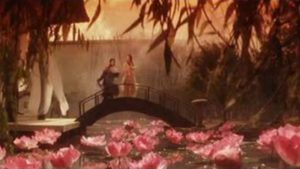 Memorable episodes include green Maggie Cheung trying to seduce the monk by gliding through the air around him while he attempts to concentrate poised in mid-air at being sexually pure and not distracted by her presence. The whole thing has a gorgeous Chinese score and the art direction makes you feel as if you’ve got lost inside a full colour version of the willow pattern plate, but an original Chinese version not some Western re-imagining. And while the men are standard comic fodder (the scholar) and equally standard flying monk action hero, the two women / reptiles are voluptuous sirens at one point mirrored by an army of women moving on all fours who besiege the monk.

While it’s recognisably a Tsui Hark film, at the same time he isn’t really repeating himself here: there’s nothing else in his body of work quite like this.

Green Snake plays in LEAFF, The London East Asia Film Festival as a late item in their Dilemma And Desire strand followed by a panel discussion.

Watch a trailer for the film below:

and a promo which arguably represents it more accurately:

Ye gods and little fishes! A dead soldier enters the afterlife where his suitability for reincarnation gets evaluated, while godly envoys are sent to Earth on a bizarre mission – from the London East Asia Film Festival, and also in selected cinemas from Thursday, August 16th [Read More...]

A young man falls in love with a demon resembling alternately a woman and a giant snake, in this Chinese animated feature – now on Amazon Prime [Read More...]