"Filthy genius movie"
An acquitted murder suspect visits the island birthplace of his alleged victim to learn about the latter’s life and the strange, ritualistic, matriarchal society that still exists there – from the London Korean Film Festival

Environmental journalist Chun Nam-seok (Choi Yoon-seok) is sent by his editor on a boat trip junket. Both men are unaware that it’s promoting a proposed Ieoh Island hotel. Chun Nam-seok was born and raised on Parang-do island, off the coast of Jeju island. On Parang-do, Ieoh Island was regarded with a terrible awe owing to the water spirits alleged to live there and believed to take the fishermen from their boats during storms at sea. The island is populated by women who mostly work as divers and their children, the men having been lost at sea on fishing vessels or having left the island for other reasons.

Aware of Chun Nam-seok’s environmentalist credentials, but not of his past associations with the island, company man Sun Woo-hyun (Kim Jong-cheol), whose brainchild the proposed Ieoh Island hotel is, expresses a desire to colleagues to get rid of him and engages with a drinking contest with the man on deck during which Chun Nam-seok goes missing, presumed drowned. Sun Woo-hyun becomes a murder suspect and is later acquitted. However, since both Sun Woo-hyun and Chun Nam-seok’s editor Yang (Am Park) want to uncover the truth behind Chun Nam-seok’s disappearance, they go to Parang-do in the hope that more information will come to light and help clarify the mystery. The island women have never lived anywhere else, except for a barmaid (Lee Hwa-shi) who has the mainland newspaper regularly delivered to keep in touch with the outside world. 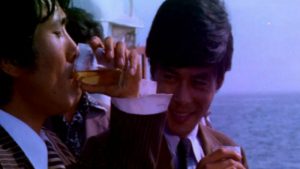 What follows is much of Chun Nam-seok’s life story told in a series of increasingly gruesome and bizarre flashbacks (often telegraphed by a bubbling noise on the soundtrack) most but not all of which take place earlier than those that precede them. Roughly, as a young man he tries to elope with childhood sweetheart Sohn Min-ja, who steals money from her mother so they can escape, but terrified of the consequences of taking her from the island’s matriarchy, he instead ties her up and leaves her to die on the rocky coastline.

When years later Chun Nam-seok returns, he takes a different woman Park Yeo-in (Kwon Mi-hye) as wife and they plan to start a business farming albalone for which she will raise the two million won seed money. Eventually, a mystery woman wearing a white shroud – perhaps an old woman although it’s impossible to tell – puts up the money with a clause to the agreement that if isn’t paid back, he will leave his wife and come and live with her. Unfortunately, pollution damages the albalone and ruins the business, causing the clause to be invoked. Sometime later, he lands a job as an environmental reporter on a Seoul paper. 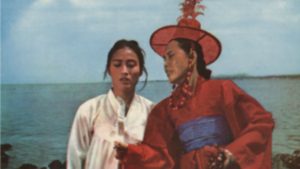 The whole is peppered with a lady shaman (Park Jeong-ja) and various ritual dances culminating in an extremely graphic late scene which not only inevitably ran into trouble with the then Korean censors (although on this occasion we were shown an uneviscerated print) but also still shocks even by today’s standards. Not that the scene is gratuitous: it has to do with the sexual mores and primitive beliefs of the island’s (female) population and is absolutely in keeping with everything else in the film.

Much is made of the island locations and there’s some deeply unsettling use of editing and zoom lens. It’s a film which demands multiple viewing and must surely rank among one of the most powerful evocations of primitive beliefs ever committed to celluloid by anyone in any culture. These days, its environmental slant lends it an extra gravitas. There’s no trading in didacticism here, however. It remains one of the great works of cinema: its director deserves to be far better known and this is one of his finest works. A true masterpiece.

Goryeojang is the concept of taking your elders up a mountain when they reach 70 so that they can face death – from the London Korean Film Festival [Read More...]