"Dirty gem"
One, two three, eyes on me! A resourceful kindergarten teacher keeps her school trip under control when they unexpectedly encounter hordes of flesh-eating zombies - now on VoD

There are certain elements which, on paper, ought never to be in the same movie. For example, if your movie features kindergarten children centre stage, you probably ought not to have a death metal musician, bad language, violent video games, flesh-eating zombies, couples having sex, sex addition or relationship breakdown. Incredibly, Australian effort Little Monsters has all of these. Rather more incredibly, it not only works but is one of the funniest comedies of the year. The sort of film critics file under ‘guilty pleasures’.

It opens with an arresting montage of a couple shouting vociferously at each other in a variety of scenarios. Sara (Nadia Townsend) wants kids. Dave (Alexander England) doesn’t – he just wants to play his Flying V with his stadium rock / death metal band God’s Sledgehammer, a goal thwarted somewhat by the fact that the band actually broke up six years ago when the other members left. “Is that a Christian band?”, asks kindergarten teacher and Christian Miss Caroline (Lupita Nyong’o) who Dave fancies. But we’re getting ahead of ourselves here. 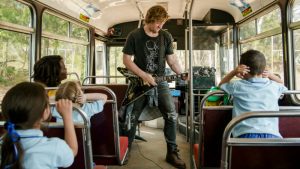 Dave seeks refuge at the home of his sister Tess (Kat Stewart) and her small son Felix (the winsome Diesel La Torraca) where he quickly gets into trouble for using Bad Words, introducing the boy to violent video games with zombies and complaining about the tiny size of their home delivered pizzas. Oh, and getting Felix to dress up as Darth Vader and barge into Sara’s flat in an attempt to propose to her, another goal thwarted, this time by the fact that she’s having sex with someone else when Dave and the diminutive Darth burst in.

Told he must both clean up his act and pull his weight if he’s to stay with Tess and Felix, Dave takes Felix to kindergarten class where he is immediately smitten by the childrens’ aforementioned and beloved teacher Miss Caroline and volunteers to help her on the upcoming school trip to community farm Pleasant Valley. However the course of true love never did run smooth: Pleasant Valley is situated next to a US military research facility from which a horde of flesh-eating zombies are in the process of escaping. 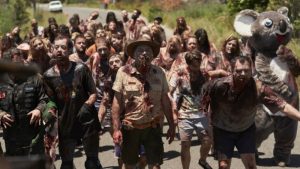 The narrative brilliantly conveys a simple child’s view of the world so that all the things that happen to Felix and his classmates, no matter how seemingly inappropriate, are just a game. Miss Caroline looks after her charges by keeping their minds occupied via simple rhyme-based rituals (“one two three, eyes on me!”) and making sure that no matter how strange or bizarre the world may appear, it’s okay because adults are in charge and will always keep them safe.

This is the world of Felix’s favourite childrens’ TV star Teddy McGiggle (Josh Gad) who, as it happens, is at Pleasant Valley with his cameraman on this particular day. And who turns out in real life, contrary to his child-friendly star persona, to be a self-obsessed, foul mouthed sex addict who’d rather lock himself inside the one safe building on site than risk his neck to allow a crowd of (possibly infected) pre-school children to share the safety of that space and survive the hordes of zombies. It’s only thanks to Dave’s ingenuity that Dave, Miss Caroline and the kids are able to get into the locked gift shop inside which McGiggle has locked himself. 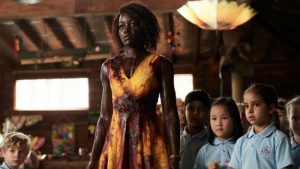 At the centre of this film, once it reaches the kindergarten class at the end of the first reel, is Lupita Nyong’o who gives everything to the part of Miss Caroline and is clearly having a great deal of fun with both the role and her co-stars, especially the small kids. She starts out in a bright yellow dress, later to be covered in dried gore which she explains to the children as, “I got into a jam fight”. She amuses the kids by singing them Taylor Swift songs accompanied by her ukulele. To give you a relief from the action, the singing and the zombies, Dave, Teddy and Miss Caroline all get one on one scenes in which they confide to someone else about their chequered pasts which makes you want to spend more time in their company (except possibly in that of the disreputable MgGiggle). Bring the pair of them back for a sequel?

Where the film really scores is when its preschool hero bursts through a crowd a zombies in his Darth Vader costume to rescue Dave with a tractor and trailer which he knows how to drive because he’s obsessed with tractors, pausing to pet a small lamb in an enclosure on the way. Most of the time, the film keeps going on sheer energy and originality, only to lose a little of that in a finale where troops turn up and, falling back on zombie film cliché, open fire on the zombies after Miss Caroline, Dave and the kids have already got them under control, at least to a degree, by singing children’s songs such as ‘if you’re happy and you know it clap your hands’. However, that’s a minor carp in a film which, while it really oughtn’t to work, turns out to be one of the funniest things you’ll see on screen this year.

Little Monsters is out in the UK on Friday, November 15th. On VoD in March. Watch the red band trailer below:

Haitian teen has to juggle her "zombi" heritage with her new-found friends in an elite boarding school somewhere in France, in this hybrid of horror and political drama - now available on Mubi [Read More...]