Height Of The Wave (Pa-go)

A small island community where everyone knows everybody else. When she was a kid, Yae-eun’s parents were washed away by a wave some 15 feet high. Somehow she remained in the boat, survived and was adopted by a local fisherman (Park Jung-bum himself). However, she is understandably terrified of going anywhere near water or boats. When a new maritime police chief Nam Yeon-su (Lee Seung-yeon) arrives on the island, her daughter Song-yi (Choi Eun-seo) bonds with Yae-eun (Lee Yeon). Both mother and daughter are initially unaware that the island harbours a dark secret around the orphaned girl.

The new chief, feeling her way around, hears of problems with attacks by wild boar. We don’t see much evidence of this beyond one attacked calf carcass and a sequence in which one of the locals guides the police chief out of an area where the beasts are likely to attack. Between them they carry a sheet as, the local reckons, it’ll fool the boars with their poor eyesight into believing there’s a much larger creature there than them. 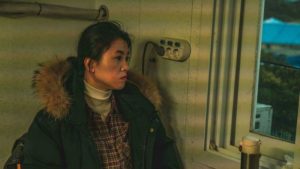 Chief Nam becomes concerned for Yae-eun who seems to disappear with boys at every opportunity and is overheard to say things like, “it’ll cost you a hundred” and “you still haven’t paid for last time”. There are a mere four young people on the island. They all live in close quarters and there isn’t much there to amuse them.

This is described as a mystery, but to be honest the script telegraphs what’s going on so early and so loud and clear that it doesn’t really work as such. Park was here working on a script by another writer which perhaps explains the overall lack of gritty visuals and the irritating tendency of the film to tell not show its information. Also, the project was originally intended for TV before being later expanded into the theatrical version shown here. 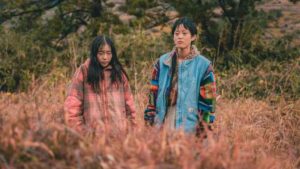 It’s rather more effective on the level of character study of not only the cop but also her daughter and the orphaned girl she befriends and her mum is investigating. There are also a couple of terrific sequences, one involving a teenager with a gun and, almost at the very end, another with Song-yi wading into the sea to encourage Yae-eun to follow her and overcome her fear of water.

Overall, though, this isn’t a patch on Park Jung-bum’s two earlier features which he also wrote himself with no impetus from television. Hopefully, it will turn out to be a minor blip on an hitherto promising career.

Height Of The Wave plays in LKFF, The London Korean Film Festival. Watch the film trailer below: