"Dirty gem"
Sink your teeth into THIS! A man and his injured girlfriend are trapped on the bottom of a drained swimming pool with a crocodile – on Shudder in July

Day (Theeradej Wongpuapan) wakes up. There’s a lot of blood. He’s at the bottom of a drained, six metres deep swimming pool with a crocodile advancing towards him. But how did he – and for that matter the crocodile – get there?

Flash back to six days earlier. Day and his girlfriend Koi (Ratnamon Ratchiratham) are working on a movie set. He looks after the swimming pool and as a bonus his dog Lucky has to heroically jump from the poolside over the water in the schedule’s very last shot. The dog leaps, the crew gets the shot, it’s a wrap, everyone’s happy. In fact, Day is so happy that when almost everyone else has gone, he dozes off on a lilo in the pool while its draining. When he wakes, the water level has gone down so far that he can’t get out. Somewhere on the ground nearby, a flier announces an escaped crocodile is on the loose. 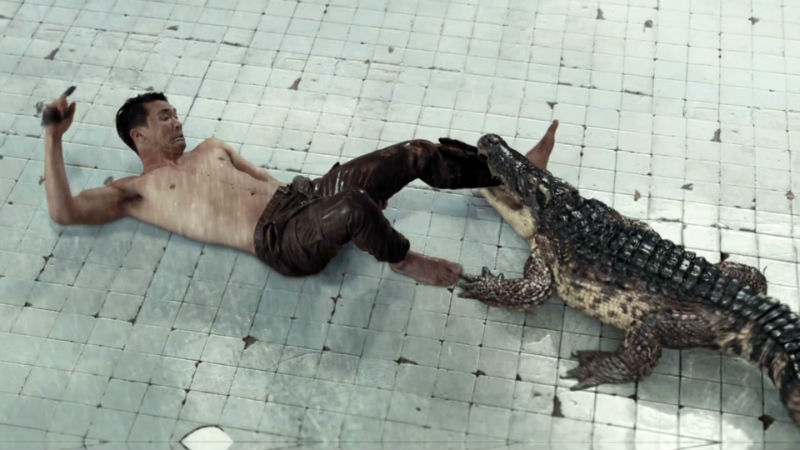 Around this seemingly flimsy opening, going one day at a time up to seven days, director Lumpraploeng constructs an edge of the seat slice of narrative suspense which deserves a place in that pantheon of suspense thrillers which take place in small locations often with reduced numbers of characters. This pantheon includes:

None of those are what you might describe as creature features though, unless you include the brief sequence where a snake enters the coffin in Buried, the wolves on the ground below in Frozen or the bear in Arctic. But the crocodile in The Pool turns it into a full blown creature feature as well.

The trapped man in the pool’s obvious means of escape would be his girlfriend turning up and lowering a lifeline or ladder. She does indeed turn up, but then owing to a rapid-fire series of events, she quickly ends up injured, perhaps fatally, in the pool with him. Other possible ways out include a helicopter overhead, a drone, the latter’s owners descending into the pool to retrieve it and the lowering of a bamboo ladder at the poolside. There’s also a manhole cover in the middle of the pool, screwed down until our hero finds a way to remove the screws, leading to a small underground cylindrical service tunnel (shades of both Dr. No, Terence Young, 1963 and Alien, Riley Scott, 1979, the latter indubitably a creature feature, the former not so because the script cut out the giant squid Bond battles in the book) which might or might not provide a way out. 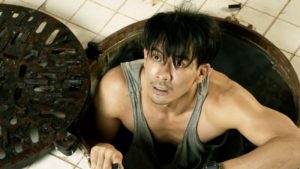 Then there’s the crocodile which following a run in with Lucky (in which we won’t tell you if the dog lives up to his name) the crocodile ends up on the floor of the swimming pool. And the fact that the hero is diabetic and his insulin shot is sitting ready in a syringe on a table beside the pool, beyond his reach.

The crocodile must be mostly CGI because otherwise at least two cast members (three if you include the dog) would have been unlikely to survive the shoot. This educated guess is based on the plethora of animation and computer technicians on the end credits, not on the croc itself which is pretty convincing on every level. The two main actors put everything they have into their performances too and the director brilliantly rachets up the tension throughout so that, as the piece proceeds to its conclusion, you’re thoroughly gripped.

While it’s hard to locate this film in specific Thai or wider East Asian culture, it shares a certain kinship with Thai action star Tony Jaa vehicle Ong Bak 2 The Beginning (Tony Jaa, 2008) which has a heart-stopping sequence with the hero fighting for his life in a flooded crocodile pit. The Pool is every bit as heart-stopping from start to finish. If no enterprising UK distributor has yet picked this up, then one of them really ought to do so.

The Pool showed at the The London East Asia Film Festival, in 2019, when this piece was originally written. On Shudder in July 2020.

Odds of survival below zero. Crashed airman must make his way across a frozen wasteland back to civilisation pulling a barely conscious, female helicopter pilot on a stretcher behind him - now available on VoD [Read More...]

A skilled climber must help his trapped family escape from a skyscraper surrounded by a rising cloud of toxic gas – from the London East Asia Film Festival (LEAFF), on now [Read More...]