The camera opens on a middle-aged lady, seated by a derelict wooden table, eyes floorward positioned, mouth tightly closed. Probed and persuaded by a offshoot voice, the interviewee speaks on the silent promise that she owes it to the members who will not speak. Cutting to the streets of Dublin, Gerard Mannix Flynn walks the ever-changing streets of Dublin, steering his viewers into a searing portrait of a bygone Ireland.

Ireland is central to this documentary, journeyed as it is in the hills of Galway, mindful as it presents the aged towns in Offaly. The film presides over its narrative in a naturalistic way, but it is the people that make this story so pressingly important. The Flynn family offer their generational perspectives over the decades of institutional abuse that left them scarred. Anne , sister to the narrator, compares their childhood abandonment to cancer, the inner effects of a faceless disease eating its way through the body. 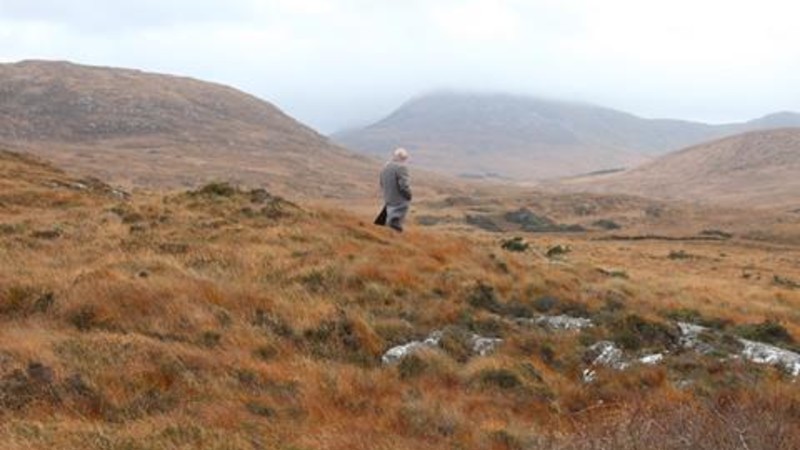 Land Without God does proffer some moments of devastating pathos. Returning to St. Conleths Reform School, Mannix finds a bird sitting on the splintered debris. Tellingly, the bird flies off just as he recalls the bruisings, beatings and moments of sexual abuse he encountered as a child. Clawing his ageing hands over the tumbled walls, Mannix remembers the times he prayed to a God that mocked him as the starry-eyed bird flies unknowingly into the misty skies.

Guilt hangs over the school just as guilt hangs in the interviewees. Margaret, one of the younger family members, speaks with rancorous disgust of the the Catholic Church and the way it treated its youthful fashioners. The film’s audience is primarily an Irish one, one born before the eighties at that, yet the humanity is universal, as the ragged aftermath is keenly heard from participant to participant.

This documentary, however, is not without flaws. Some frames are amateurish in display, some musical cues intrusive in their entrance and occasionally the voice-over adds little to the proceedings. The import of the film isn’t in its execution, but in its existence, ensuring that one of the more shameful phases of recent Irish history is remembered.

Land Without God is in Irish cinemas right now. A UK release has not been announced yet.

A Bump Along the Way

A 44-year-old single woman finds herself carrying a pregnancy following a one night stand. How will her 15-year-old daughter feel about this? Irish comedy is in cinemas Friday, October 11th [Read More...]

10 films about The Troubles

Eoghan Lyng lists 10 dirty movies about the chaos and conflict that prevailed in Northern Ireland for several decades, until the signing of The Good Friday Agreement in 1998 [Read More...]

Doc about the iconic "hard-left" Labour politician from Bolsover is insightful and engaging, but it also slips into clichés and neglects urgent topics - now on DVD [Read More...]