"Dirty gem"
A skilled climber must help his trapped family escape from a skyscraper surrounded by a rising cloud of toxic gas – from the London East Asia Film Festival (LEAFF), on now

Yong-nam (Jo Jung-suk) can’t seem to find gainful employment. A text message tells him another job application has been turned down. He spends his days at the local playground, working out on the climbing frame watched from a bench by old ladies. Passing by with schoolmates, his prepubescent nephew Ji-Ho (Kim Kang-hoon) does his best to shrug off the embarrassment he feels if he goes anywhere near his uncle. But Yong-nam scarcely notices: he’d much rather wallow in self-pity about Eui-ju (Im Yoon-ah), the girl he fancied from the rock climbing club who was not only a better climber but also dumped him. His grown up sister Jung-Hyun (Kim Ji-yeong) constantly berates him both for his failure and for his keeping lots of climbing gear in his bedroom cupboard.

So when his family gathers to celebrate his granny’s 70th birthday, Yong-nam suggests the skyscraper hotel where Eui-ju is rumoured to work. Sure enough, while he’s doing his best to sit at his table and not get roped into singing with everybody else, she appears. As he tries to impress her, inventing stories about how well his corporate career is going, you can feel the impending romantic disaster. She, meanwhile, may look successful in her job as hotel vice-manager, but her slimy manager in who she has no personal interest is constantly trying to date her and can barely do his job (holding the position simply because his dad owns the hotel). 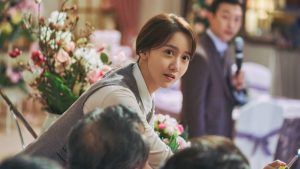 Then the film switches gear as a disillusioned industrialist releases a deadly gas from a lorry in the centre of Seoul, not far from the hotel, which burns up the lungs of anyone unfortunate enough to come in contact with it. Cue drivers clutching at their necks and fatally crashing cars and pedestrians fleeing before the advancing wall of toxic gas. Cue also Jung-Hyun with Ji-Ho in tow, having briefly nipped out of the hotel, suddenly facing the approaching gas. While the child gets himself safely back to the lobby, the mother is overcome and suffers facial burns and unconsciousness before the quick-thinking Yong-nam rushes down from the floor where their party is taking place and carries her back to the sealed safety of the building.

With the gas cloud both spreading and slowly rising, the guests go up to the top floor to access the roof in the hope of being rescued by helicopter, but the door is locked and the incompetent manager has lost the key. Back on the party floor, Yong-nam improvises with rope, breaks a full storey glass window and goes climbing up the side of the building to access the roof, forced to unhook his safety line en route because his rope isn’t long enough. 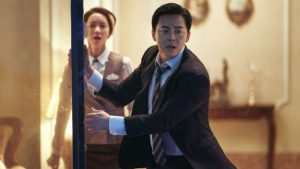 When a ‘copter eventually reaches them with a rescue cage, there is room for everyone but himself and Eui-ju, who as manager commendably wants everyone else airlifted first. Remaining behind, the pair must negotiate a harrowing series of building to building jumps, Parkour and side of building climbs as they ascend higher and higher on the Seoul skyline in the hope that a ‘copter will reach them before the rising gas does.

It’s no surprise that this obvious audience pleaser has been a huge box office success in its native South Korea, juggling as it does deftly observed family comedy with nicely underplayed romantic subplot and genuinely gripping climbing, jumping, running and other action scenes. If the chemistry between the two leads accounts for some of this success, that wouldn’t matter without all the thought that director Lee has clearly put into his script to make an essentially simple idea work very well indeed. The feeling for family culture which grounds the film for its first reel pays dividends in terms of audience sympathy for the lead character and the film throws in not only some clever ideas involving drones but even at one point the extraordinary visual distraction of a giant model of a spider crab half way up a building over which our leading man and lady must climb. 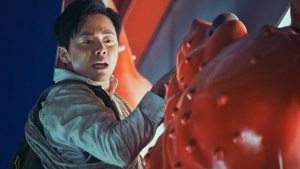 The film highlighted the problem of locked roof access in buildings and the ensuing controversy has thrown up a government reaction that will hopefully in due course result in changes to South Korean law. On a wider note, it says much about a society which values people in terms of their job while marginalising any other talents or interests they may possess. When the chips are down, the hero who saves the day here is a social outcast whose frowned upon hobby is exactly what’s needed to survive the unexpectedly perilous situation in which he finds himself.

This is light, frothy entertainment and a thoroughly engrossing experience, well worth seeking out if you get the chance. LEAFF are to be congratulated for choosing it as their opening film.

Based on a real lie! Upbeat film about family and terminal illness subtly explores the vast, cultural gulf between West and East - now available on VoD [Read More...]