Tales from the Lodge

"Thoroughly sanitised movie"
British blend of black comedy and slasher with flavours of other horror subgenres is both unsavoury and indigestible - in cinemas on Friday, October 25th

In a quaint and remote lodge somewhere in the idyllic English countryside, a small group of friends meets up in order to scatter the ashes of their friend Jonesy, who tragically drowned in the local lake a few years earlier. Some of these people are facing some sort of painful predicament: Martha’s husband is terminally ill, while Emma is struggling with motherhood, and so on. The jaunty Paul, on the other hand, is in high spirits and wishes to party. He and his girlfriend Miki stir up the already existing tensions. Then a mysterious murderer appears. This is more or less how the story goes. Not that it makes much sense. I couldn’t make head or tail of the story. In fact, I had to read the press notes in order to write this introductory paragraph. 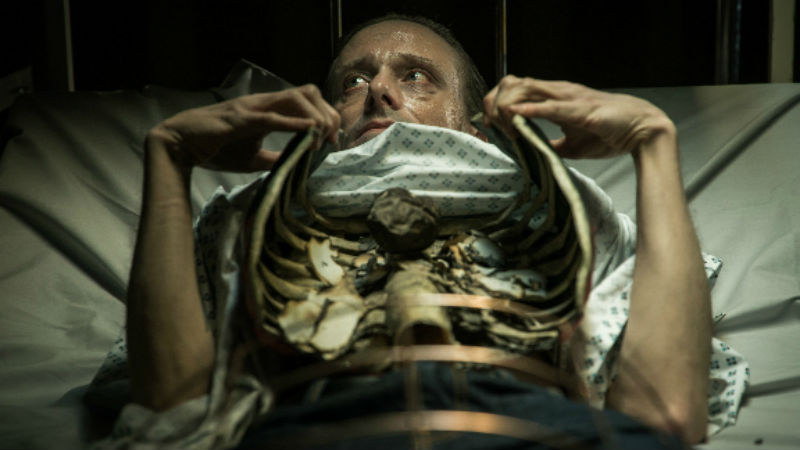 Tales from the Lodge is genuinely one of the most disjointed and unintentionally ridiculous films that I have seen in a long time. And I watch a lot of films. It works neither as a black comedy nor as a horror movie. There are no jump scares. The humour is tedious and trite. The jokes are hardly witty: ““It’s so peaceful in here that the kids would love it: there are no cars and no paedophiles”. The ashes of Jonesy fly on the eyes and mouth of one of the mourning friends as the wind blows the content of the urn. A fat character who looks like “Kiefer Sutherland” appears in a bizarre cutaway gag. The sex scene is cringeworthy. The zombie make-up and the special effects are awful. The plot twist at the end conjures up the three inevitable letters:” WTF?”. This is not slapstick. This is not wilfully preposterous. This is a combination of atrocious script writing, shambolic camerawork and clumsy acting.

The only frightening thing about Tales from the Lodge is that it could get a theatrical release. That is the real joke. It is in cinemas across the UK on Friday, November 1st. Scream and run away from it as fast as you can!

Is this the year of “minority” horror?

The first six months of 2017 saw a number of dirty films either made by women or dealing with the subject of racism. Is the mutant beast of horror changing shape or is this just a quick fad? [Read More...]