"Dirty gem"
After tragedy strikes, eight girls find themselves stranded inside a house without electricity, in this all-female thriller with echoes of Tarantino - now available on VoD

Quentin Tarantino’s The Hateful Eight (2015) resembled something more of a play than a film. Set in the wooden confines that a stagecoach lodge sheltered eight strangers, the indulgent run time devalued a compelling premise which otherwise could have granted Tarantino a winner. That’s where Ladyworld comes in, composing an eerily similar premise, but mindfully keeps the viewers attention long enough to enjoy the stellar powerhouse ensemble.

This is a film by women, about women and for women. It understands them in an unconstrained way. The characters, not a man among them, find themselves in various points of dress, undress and duress as they try to navigate themselves in a situation which has literally locked them into the party. Between them, they fight to see who should lead the group to safety. Piper (Annalise Basso) with all her Machiavellian qualities, finds the more grounded Olivia (Ariela Barer) a competitor for the title, while the others struggle with the natural fears of adolescence and the will to survive. 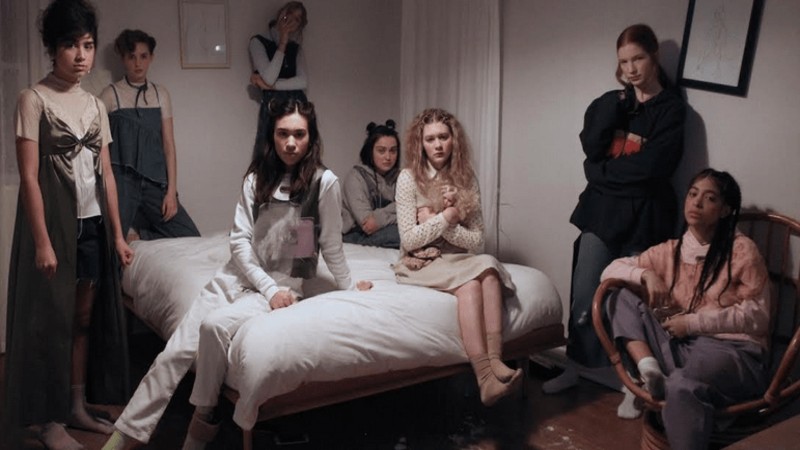 Amanda Kramer has a theatrical background, easily discernible in her style of filmmaking. Characters are more important than the camera. The director does, however, offer moments of directorial inventiveness, not least with some slow Gilliam style close-ups detailing the mass claustrophobia settling in.

Through a thick impasto of cuts, we watch the heroines huddle from doorways to hallways before perching in a tautened, orderly nest on the cupboards. There is an unnerving acidity at play as viewers and actors nestle in the hurried house, with food, nerves and water on short supply. This is trick of discomfort has been traditionally kept for the theatre stage, as actors and punters join each other in gaped breath as they ask of each other their will to survive.

And then there’s that gut punch of an ending as we watch the characters wade in the bathed sunlight of fiery despair. Silently, the credits roll over the tattered leads as the single moment induces the varied tear filled responses each of us finds on our life’s journey.

If Quentin Tarantino isn’t green with envy, he should be! Ladyworld is in cinemas on Friday, October 18th. On VoD Monday, October 28th.

A victim of domestic abuse turns into for-hire vigilante, in this satisfying American revenge tale - in cinemas and also on digital HD on Friday, May 31st. [Read More...]

Aspiring actress has to grapple with lewd and manipulative filmmaker, in cleverly multilayered psychological drama from China - on Mubi on Tuesday, July 13th [Read More...]