"Dirty gem"
A young man falls in love with a demon resembling alternately a woman and a giant snake, in this Chinese animated feature – now on Amazon Prime

Conceived as a prequel to China’s White Snake legend which has spawned numerous adaptations including Green Snake / Ching se (Tsui Hark, 1993), this computer animated Chinese epic concerns demon sisters Blanca and Verta (voiced by Zhang Zhe and Tang Xiaoxi) who look to all intents and purposes like beautiful women but are actually demon snakes in disguise – a white snake and a green snake as you might guess from their names. With her power and form enhanced by her sister’s gift of a green hairpin, Blanca leaves the demon world and visits ours for a showdown with a human General trying to prove his worth to the Emperor by dabbling in occult rituals involving snakes. When the showdown doesn’t go as planned, Blanca finds herself alone and suffering a complete loss of memory as to who (and indeed what) she is.

She awakes in a small, human, rural village where the local economy is built on catching snakes for the General. Local boy Sean (Yang Tianxiang) has no interest in catching snakes, spending his time instead sourcing toys for the local children or inventing things. Smitten with the amnesiac Blanca, Sean is astonished when by magic she rescues his dog Dudou from falling off a mountain ledge and by further magic gives the animal a human voice. Sean eagerly scrambles after Blanca as she flies up perilous mountain terrain, trying hard to look beyond her growing a snake’s tail when she does so, preferring to think of her as a woman rather than a demon. 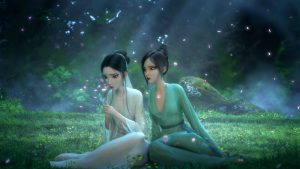 It’s a strange and somehow very Chinese combination of creature feature, mythology and full on romance with the girl torn between the human and demon realms and the boy trying to justify his feelings for her. The physical effects work that Hong Kong would have been used 25 years ago is replaced by CGI which is generally of a higher standard than you would expect. As well as the two sisters, the snakes include a whole army of snake people whose cinematic origins go right back to Ray Harryhausen’s human-torsoed, snake-tailed Medusa in Clash Of The Titans (1981) and his similarly built, dancing girl in The 7th Voyage Of Sinbad (1958). The snake people’s leader, much like the two sisters, switches between woman and snake, in her case an ethereal, yellow fire snake.

Equally inventive is the creature that pulls the General’s chariot, which looks like a crane with three heads. Other highlights include a spectacular firebird and malevolent black manifestations of the General’s dark magic. When Sean and Blanca reach the forge where the green hairpin was made, they meet another demon in the form of a woman with two faces, one human and, when she turns round, one fox. 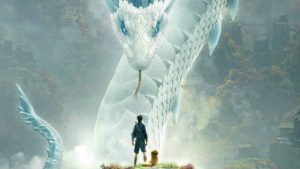 The whole thing is beautifully paced with never a dull moment. Full blooded romantics will be struck by a memorable ending which throws into the mix Chinese concepts of reincarnation. Anyone who enjoyed the action movies coming out of Hong Kong in their halcyon days of the eighties and nineties prior to Hollywood’s co-opting such stunts for The Matrix (The Wachowski Brothers, 1999) will love this. Hong Kong did some amazing stunts using aerial wire work back then, but that will only get you so far and White Snake puts CGI to full and highly effective use, getting the most out of the medium and achieving things that would be near impossible in live action. So, to all intents and purposes an old school Hong Kong action fantasy redone as computer animation – and it works wonderfully. A joy.

White Snake played in the BFI London Film Festival, when this piece was originally written. On Amazon Prime from February (2021).

Fantastical, giant creatures Godzilla, King Ghidorah, Mothra and Rodan battle it out on land and sea, leaving cities devastated in their wake - in cinemas from Wednesday, May 29th [Read More...]