It seems to be constantly raining in urban Singapore. Ling (Yeo Yann Yann) is forever sitting in her parked car injecting insulin. She has a job teaching Mandarin to a class in a local boys secondary school. Half a dozen of them are such poor students that she sets up a remedial class after hours to get them up to speed, but while they’re made to attend, they really aren’t interested. With one exception.

Wei-lun (Koh Jia Ler) will be in trouble with his parents if he doesn’t do well in Mandarin. As the other boys bunk off the remedial class with the slightest excuse, it pretty quickly develops into Ling teaching Wei-lun on a one-on-one basis. He doesn’t live that far from her home, so she often gives him a ride home in the car afterwards, unaware that behind her back he has for a long time been taking pictures of her with his mobile phone in class.

Ling has been trying to have a baby with her husband Andrew (Christopher Lee Ming-Shun) for some eight years. He’s long since lost interest and their relationship is severely strained, with Andrew hardly ever at home working long hours in his high pressure, financial job. Thus it falls mostly to Ling to look after Andrew’s wheelchair-bound father (Yang Shi Bin) who lives with them who is unable to dress, bathe or feed himself and requires a high level of care. He spends his days when Ling is out at work watching TV reruns of kung fu movies. 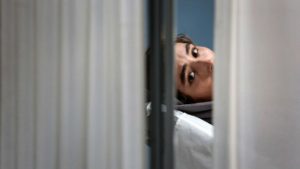 As Ling’s tuition of Wei-lun proceeds, he asks if she can accommodate his attending after school wushu (a form of martial arts) classes. She starts to tutor him in her home so that she can keep an eye on her father-in-law at the same time. The boy seems to get on with the elderly invalid, at least in part because of a shared enthusiasm for martial arts. Eventually, Wei-lun invites her and her father-in-law to watch him represent the school at a national wushu contest. Focused on becoming pregnant and frustrated by Andrew’s lack of romantic interest in her, Ling fails to notice the boy’s increasingly obvious infatuation.

The constant rain seems almost like a fifth character in this drama beating on car or building windows and sweeping across roads making driving conditions treacherous. While it looks naturalistic, the rain has been staged for the cameras at considerable expense. It adds much to the overall atmosphere of the piece, not least to the sense of impending disaster.

Both Yeo Yann Yann and Koh Jia Ler appeared in Anthony Chen’s earlier Ilo Ilo (2013) but the director didn’t set out to cast them again, it just worked out that way. The child actor is now considerably older than he was on the earlier film and, as such, almost unrecognisable. 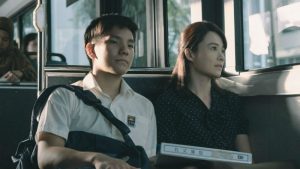 In this newer film, both leads give terrific performances, with Yeo’s nuanced portrayal of a woman under numerous forms of stress finely observed while Koh’s role as a teenager completely out of his depth in a world of more complex adult issues convinces.

Various details come together: the incessant rain, Ling’s stress caring for an infirm and ageing parent scarcely helped by pressures of trying to conceive a child with little encouragement from an increasingly distant spouse, the increasing isolation of teacher and student as they increasingly find themselves sharing each other’s company. Chen never loses his grip delivering his uncompromising vision, a powerful experience which never lets up. Here’s hoping an enterprising UK distributor gives this the release it deserves.

A teenage girl in Seoul, Korea, 1994, comes to terms with life on a number of levels - personal, family, social, political  – from the BFI London Film Festival and the London East Asia Film Festival (LEAFF) [Read More...]