"Filthy genius movie"
Boy meets girl. Alas, girl is in a psychiatric hospital convinced that the world is out to get her... in this filthy genius Belgian movie – from the BFI London Film Festival

Twelve-year-old Paul (Thomas Gioria, familiar here as the child in Custody (Xavier Legrand, 2017) likes caring for animals. Such as, for example, the fallen chaffinch he discovers at the bottom of the tree in which he’s building a treehouse. He’s used to foraging outside for food. He spends much time in the woods surrounding the mental institution where his single parent mum works and has their accommodation. One of her conditions of employment, stressed by her female boss Dr. Loisel (Gwendolyn Gourvenec), is that Paul not have any contact with any of the institution’s patients.

One day, his playing is interrupted by the arrival of a girl about his own age in a red dress. The staff are looking for Gloria (Fantine Harduin). Before they find her and take her back into their care, she and Paul have made friends. Aware of the rules, he has admonished her that the institution must not even so much as see them together. 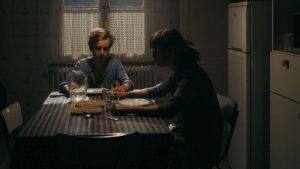 Over time and many further clandestine meetings, their relationship deepens and grows. Eventually, Dr. Loisel discovers it and Paul is warned away from Gloria by his mother: the girl has done and is mixed up in some very bad things. However, the two kids continue to spend illicit time with one another, culminating in Paul’s stealing the institution’s keys to unlock the room in which Gloria is being held. This leads to a tense scene when the pair of them confront Dr. Loisel on a spiral staircase.

After that they go on the run together cross country following a river, pausing briefly to go off a high up bridge and swim together in the water. From there they leave behind a small trail of devastation with those people en route kind enough to take them in – a young couple (Peter Van den Begin, Charlotte Vandermeersch) and their baby on a moored boat, an older widower (Benoît Poelvoorde) who lives alone and keeps chickens. 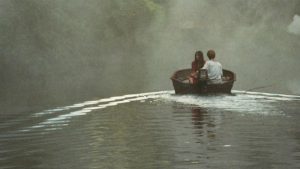 As in earlier outings Calvaire (2004) and Vinyan (2008), du Welz proves himself adept at handling slow burning, character-based narratives with a deep underpinning of terror. The contrast between Paul, so easily turned from the light side of things to the dark and yet somehow moving back towards the light side, and Gloria, possessed by dark forces and misapprehensions about life that she doesn’t quite understand, is stark.

Paul is very much with Gloria while somehow she is forging her own path forward and will do so whether or not he comes along. He is being manipulated and she really doesn’t care that she’s doing it. Paul is so instantly likeable that you wince at his numerous bad choices with Gloria; she is so unconsciously devious and twisted that try as you might to like her, something about her makes your skin crawl.

Through it all, du Welz employs his trademark, matter-of-factly unpolished cinematographic imagery, quite literally grounding the film and rendering his narrative highly potent: while you marvel at the ordinariness of it all, he slips some really unpleasant ideas under the surface to unsettle you. Currently lacking a UK distributor, this dirtylicious gem is well worth tracking down while you can find it in the LFF.

The family unit breaks down irreparably in this riveting and stylish CG short echoing Von Trier, the Quays, Hitchcock and Lynch – from the Annecy Festival [Read More...]

Spanish film about pyromaniac released from jail offers a fascinating view into peasant life in the region of Galicia, as well as a breathtaking immersion into the power of fire - on VoD on Friday, April 6th [Read More...]

Four boys in the Welsh countryside of the 1970s grapple with an unexpected tragedy, and face the premature tensions of adulthood, in a film with strong echoes of Boyz n The Hood - in cinemas Friday, June 7th [Read More...]