"Greasy movie"
A teenage girl in Seoul, Korea, 1994, comes to terms with life on a number of levels - personal, family, social, political  – from the BFI London Film Festival and the London East Asia Film Festival (LEAFF)

Seoul, South Korea, 1994. Less than 10 years since South Korea has become a democracy. The year of the Winter Olympics, the death of North Korean leader Kim Il-sung and the Seongsu Bridge collapse. The latter incident will leave its mark on some of the characters here.

Teenager Eun-hee’s mum and dad (Jung In-gi and Lee Seung-yeon) run a small food store, sourcing “only the finest ingredients”. On occasion, they deliver to other suppliers and the whole family is roped in to make sure the orders are prepped and sent out on time. They are fiercely proud parents who want only the best for their kids. The best, as they understand it, is doing well in the school and university system, presumably with the idea of getting a well paid job afterwards.

This message is reinforced by her school. A male teacher has the girls chant, ” I will go to / Seoul National University / instead of karaoke”. He also gets his class to nominate the top two delinquents among them, defined as those who smoke or date instead of studying. Eun-hee is the top nominee. Or, as two of her classmates with a clear sense of privilege put it when talking about her, “dumb girls like that don’t make it to college and they become our maids” 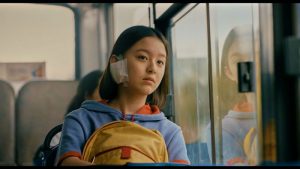 Her brother Dae-hoon (Son Sang-yeon) is achieving good grades at school and looks set to go to university. He has a nasty side too: he periodically bullies and hits Eun-hee, making her home life a misery. Her sister Soo-hee (Park Soo-yeon) is out a lot and looks less devoted to academic work, on one occasion hiding in a cupboard to avoid their father.

Eun-hee herself (Park Ji-hoo) is an outsider who doesn’t really fit in at school. She likes to draw and wants to b a comic artist.

She has a boyfriend of sorts, schoolboy Kim Ji-wan (Jeong Yun-seo) who she tentatively gets to kiss her who is later dragged from her presence by his overbearing mother. A later same-sex romance with the shy Bae Yu-ri (Seol Hye-in) comes to nothing.

A lump under one ear will later cause her to be hospitalised.

Her parents send her to the local Chinese cram school, but that doesn’t motivate her academically until her teacher is replaced by university student Miss Kim Young-ji (Kim Sae-byuk), first seen smoking a cool cigarette on the school stairwell, who gets both Eun-hee and Calvin Klein clothing-obsessed fellow student Jeon Ji-suk (Park Seo-yun) to talk about themselves and their interests, the only person in the film to do so. 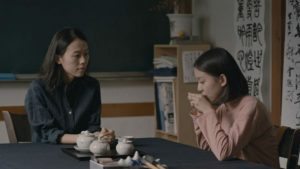 When the two students go shoplifting and get caught, Ji-suk reveals Eun-hee’s father’s name to the understandably incensed owner. It is Miss Young-ji to whom Eun-hee talks about the crime and in whom she subsequently confides, the one person in the film who brings her out of herself and gives her good advice, e.g. to stick up for herself when her brother beats her. Consequently, they become friends. And Eun-hee becomes vaguely aware, through titles on Miss Young-ji’s classroom bookshelf, of politics and such schools of thought as feminism.

It’s a bleak period picture of an emerging democracy where almost everyone seems to be focused on career at the expense of relationships or family. At the same time, though, it’s highly affecting as a sympathetic portrait of a teenage girl’s life which also exhibits an optimistic undercurrent in the character of a teacher who goes against the grain and shows a genuine interest in her pupils.

House Of Hummingbird plays in the BFI London Film Festival and the London East Asia Film Festival (LEAFF). Watch the film trailer below: