"Filthy genius movie"
Send in the clone! Old Will Smith is hunted by young Will Smith in a movie filmed with groundbreaking cinema technology - now available on VoD

Henry (Will Smith) is a mercenary sniper so skilled that, in this film’s bravura opening sequence, he can shoot a distant target through the carriage window of a fast moving train. He’s getting on in years, though, and has decided to retire because he feels he’s losing his edge. He should have shot the mark in he head not the neck, and he could so easily have shot by mistake the inquisitive little girl who was briefly standing in the wrong place at the wrong time.

No matter, he’s retiring and plans to spend his time sailing on the open sea and generally doing nothing. He hasn’t yet realised that the target sold to him as a terrorist was, in fact, innocent – and consequently he”s about to become a target himself. Moreover, because his skills are unrivalled, his employers represented by Clay Verris (Clive Owen) have cloned him, raising the clone to capitalise on his strengths and improve on his weaknesses. And to eliminate him, they’ve sent his clone – a younger, leaner, hungrier and arguably more efficient version of himself. 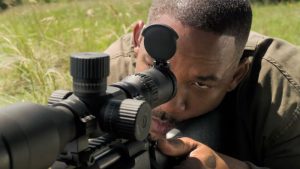 Thus, the film is basically old Will Smith hunted by young Will Smith with, as is the way in Paramount action thriller franchises from Mission Impossible to Jack Reacher, a female companion thrown in for good measure, here in the form of Mary Elizabeth Winstead. Benedict Wong plays an old friend of Henry.

It seems we haven’t quite reached the point yet where an actor can be scanned into a computer as in The Congress (Ari Folman, 2013) and turned into a career’s worth of movies. Young Will Smith is played by the actor and then changed into a younger, leaner version of himself via reference footage of himself in old movies and mountains of CGI work. It’s impressive; you really feel like you’re watching a real life, younger Smith. Ang Lee is, after all, the man who pushed effects technicians to create the central character of Hulk (2003), a technically groundbreaking if flawed film. There as here, he’s pushing at the limits of the medium and learning all the time as he goes. 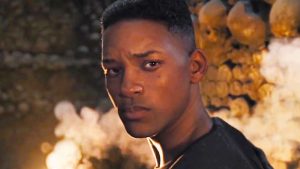 As if that wasn’t enough innovation for one movie, Lee here redefines the action movie deploying the combination of 3D and HFR (High Frame Rate of 120 fps) that he employed on Billy Lynn’s Long Halftime Walk (2016) although it was shown in only five cinemas around the world in that format (New York, Los Angeles, Taipei, Beijing and Shanghai). It’s not clear exactly how many cinemas will be able to play Gemini Man in the exact format Ang Lee intended – see here. Sadly, not every director is Ang Lee and as with 3D, there will no doubt be a rash of not very good 3D + HFR movies so that ticket prices can be upped. A rash of run of the mill 3D movies is why 3D is now widely looked down on.

So, what’s so impressive about this particular movie in 3D and HFR, then? Well, Lee thinks about every shot in terms of 3D, conceiving it as not a flat photographic image but sculptural, three dimensionally blocked out, staged action – whether that’s two people talking in a room or an above the water / under the water shot of two fighting people falling a couple of storeys into water. On top of that, the increased number of frames per second makes everything feel more real, and when you’re talking about fast paced action stunt work that actually makes a considerable difference to your viewing experience. My question on emerging from the press screening, for the record at London’s Cineworld, Leicester Square on the digital Imax screen, was, “What exactly have I just watched?” (I’ve been unable to ascertain what frame rate was used at that screening, although it felt much higher than 24 fps.) If all directors were as talented as Ang Lee, the answer would be, “the future of cinema”. One can but hope.

Gemini Man is out in the UK on Friday, October 11th. On VoD in March. Watch the film trailer below: