"Dirty gem"
Take a journey through the sensual world of Creole, in this short yet fascinating retrospective of jazz professor Etienne Charles - from the Native Spirit Festival

Jazz creole artist Etienne Charles is one of the genre’s most inventive musicians, garnering acclaim for three impressive and well-received albums for his own Culture Shock Music imprint. A man still in his twenties, Charles understands the vitality and power Creole music holds on those who listen to it, inviting audiences to see, listen and feel the music he espouses on a daily basis. His style of raw playing has been hailed hailed by The New York Times as “an auteur” and by Jazz Times as “a daring improviser who delivers with heart wrenching lyricism”.

Through a trilogy of short films, Charles shows the beauty Trinidad holds in both its visual and musical form. Charles’ blend of improvisation and first-class musicianship has an infectious quality that attracts fans of all ages. The films capture the artists pure spontaneity, thriving and diving through the Trinidad streets.Those of a cynical disposition might not regard the films as much more than “how to” television manuals, but there is a vestige of biting humour which merits the viewing of these films. And at least the music sounds stellar, which is more than you could say about a One Direction film! 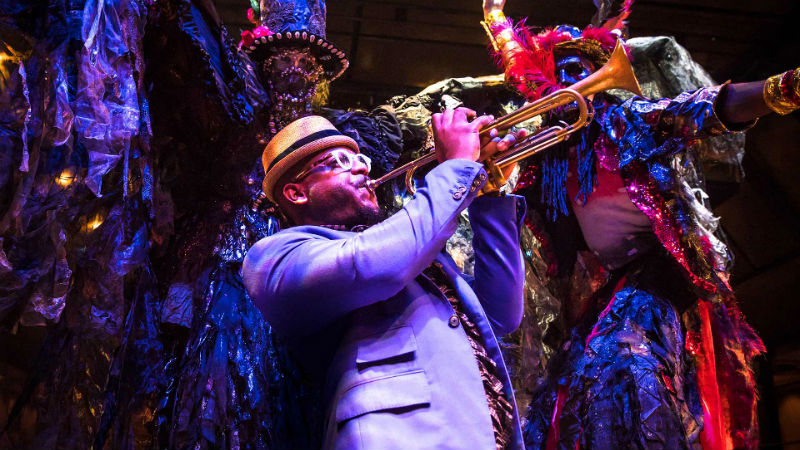 To the many unversed in cultivated Caribbean culture, opening film Carnival the Sound of a People (Research) proves a tasty photograph, as an assemblage of clips shows a city dancing to the tribal appetisers of his trumpet playing. His mantras and manouevres incorporate the rhythms from the French, Spanish, English and Dutch speaking Caribbean formats in one salty menage. Music is often used as an act of rebellion and Bamboo opens with a title card reminding viewers of the terror British Colonial Rule threw down on the masquerade bands of 1884. Tumbling and towering the drums shimmer through the soundwaves, as a conflate of images show the power the percussive instruments still hold centuries later. For once these films seem frustratingly short, yet dissuade the view that drums and movies do not mix.

Which is where Jab Molaisse comes in, tying the triumvirate together in a cross cut patio of pop videography. Blue painted drummers begin the tribal rhythms that cuts from musician to musician with transcendental fusion. Together, the jive style silhouettes flips from percussive precision as the film speeds without dialogue, a six minute video of clever cuts and cross-shapes. In its own way, the films speak to each other with the sweet music that melodically sings in the listeners ear. So, a bit more than a trio of “how to” manuals!

Etienne Charles’s Docushorts shows on October 12th at 17:00 at the Soas Brunei Theatre, as part of the Native Spirit Festival. Grab your ticket now here!

A young princess of the T'boli indigenous group of the Philippines discovers that she has been chosen by the gods as her village's dreamweaver - from the Native Spirit Festival [Read More...]