"Dirty gem"
As a Japanese TV journalist works with a Japanese camera crew in Uzbekistan, she meditates on her life and career - now on Mubi

Yoko (Atsuko Maeda) is a TV journalist working with a production company trying to find magazine format stories as they travel around Uzbekistan. None of them speak Uzbek, so they rely on a local interpreter Temur (Adiz Rajabov). When not shooting, Yoko explores the local city.

The prodigious Kiyoshi Kurosawa is best known for his horror films Cure (1997) and Pulse/Kairo (2001) yet has dabbled in a wide variety of genres. This one is, for want of a better description, a travelogue with a hint of a musical. The heroine desperately wants to be a singer, but has found herself in the job of roving TV presenter – not exactly what she wanted to do, but it’s certainly show business. She wonders if she’s lost her way. Her boyfriend Ryo who we never see is a firefighter working back at Tokyo harbour with whom she periodically communicates by text.

Among the magazine segments she and the crew are required to shoot are trying to catch a legendary two metre fish (which they never find) at a lake, a fairground ride which turns the rider upside down over and over and a restaurant where she must sample the local cuisine on camera and extol its virtues even though it hasn’t been cooked properly. She contributes one idea that comes off, involving freeing a goat from its urban pen into the wild. 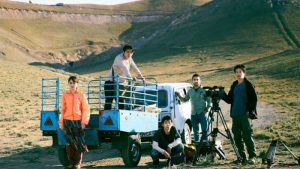 Outside of shooting, she wanders out and explores the local urban landscape. She catches a bus to a local bazaar, a fairly hair-raising experience for a foreigner who doesn’t speak the local language. In the bazaar, her foreign looks, slight Japanese frame and short skirt attracts the gaze of males not used to seeing such things among the local female populace. At dusk, she hurries through streets, alleyways and underpasses where groups of men are gathered.

On another occasion, she follows the sound of a female singing opera (Mimi’s Song from La Bohème) which leads her into a building and through a series of exquisitely decorated rooms into a vast space where the woman is singing… and thence into an actual stage auditorium where she herself can sing Edith Piaf’s Hymne à l’amour, one of the lines of which is referenced in the film’s title.

After the shoot’s director has decided he’s had enough of shooting the magazine material, which isn’t producing particularly good results, Yoko is given a portable camera and told to try shooting some segments herself. She starts with another bazaar but before long is fleeing from cops who accuse her of filming in an unauthorised area. 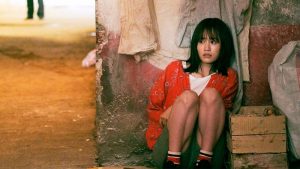 Most of Kurosawa’s films to date have been shot in his native Japan with Japanese cast and crew. Before this film, rare exceptions included Daguerrotype (2016), shot in France with a French crew, and Seventh Code (2013) in Vladivostock. Like the latter, To The Ends Of The Earth employs a Japanese cast and crew in foreign locations and feels quite different from anything else the director has done. The Uzbek locations seem to dictate very different camera setups and pacing.

Yet it feels at once familiar to those used to the director’s style of films. Those not wishing to look beyond such genres as horror or science fiction may not be happy, but those who like what he does regardless of whether or not it fits an established genre are in for a real treat.

To The Ends Of The Earth played in the BFI London Film Festival and the London East Asia Film Festival (LEAFF) of 2019, when this piece was originally written. It’s on Mubi in November (2020). Watch the film trailer below: