"Greasy movie"
Life and love at the bottom of the pile in Mumbai rendered in colourful and thoroughly appropriate 2D animation, Indian style – from the BFI London Film Festival

From its opening in which alternately horizontal and vertical paint brush strokes appear on the screen, slowly building into a street scene, you know you’re in good hands. This 2D animated tale deftly juggles its assorted characters and themes to construct a panorama of everyday life in Mumbai.

A framing device explores Bollywood action movies in which the no nonsense action hero can rescue the girl by beating up the bad guys. Outside of the movies, however, life isn’t quite so simple. The clearly well-off driver of a highly conspicuous, flashy car involved in a hit and run accident later in the narrative turns out to be the Bollywood action star glimpsed at the beginning. Those doing well out of the dream factory don’t live out the virtues it espouses. 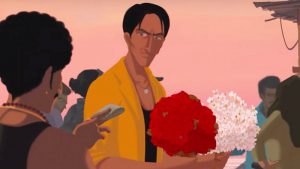 Images of romantic lead Salim are modelled after the screen idol, yet unlike the idol, Salim is capable of change. When he steals flowers from graves to give one to Kamala, the girl he loves, she is horrified and labels him a thief, with the result that he changes his behaviour.

Also unlike the big star, both lovers have money problems. Salim is selling flowers to motorists, Kamala is doing a deal with a gangster to go to Dubai. That’s true of other characters too. An underage boy is dodging police raids while working illegally in a restaurant.

Meanwhile, his sister is taking English lessons from a fading Bollywood starlet Shirley D’Souza living in memories of a successful past. The starlet’s collection of automata from that period are breaking down, but happily her pupil’s grandfather has a gift for repairing such things. 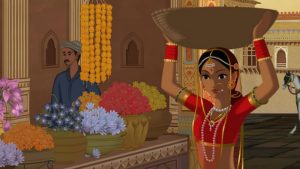 The animation, designed with an intense and gorgeous colour palette to outdo even the most vibrant of live action Indian movies, allows the narrative to periodically shift into cultural, historical and even mythological areas and back again without missing a beat. As well as action movies, these include a man’s strange journey seated atop a flying horse with a woman’s head. We witness the killing of the hero’s parents at the hands of soldiers attacking their Kashmiri village. The gangster appears as a bird of prey, flying in to menace Kamala then flying out. There’s also a highly effective scene where as the ageing starlet walks down the street hand in hand with her young pupil, their surroundings turn from contemporary colour to period black and white.

This is an impressive warts and all picture of Mumbai. The animation style is highly original and well suited to the film’s aims. It’s not really like anything else out there and deserves a wider UK release.

A rural Indian girl wishing to find her sister who has been sold to Mumbai finds herself tricked into working in a brothel, with no hope of escape - in cinemas from Friday, January 25th [Read More...]

The whore, the madonna and the one-night stand. A rotoscoped drama in which three women in very different social situations struggle to survive the sexually repressive regime that is Tehran - now available on VoD [Read More...]